Known to fans everywhere for his roles in Broadway’s Rock of Ages (Hertz), Sweet Charity (Vidal), Sunset Boulevard (DeMille), Peter Pan (Hook), Beauty and the Beast (Lumiere), Cyrano (Le Bret), in addition to Nine, Sunday in the Park with George, Victor Victoria, in national tours of Les Misérables (Javert), Assassins (Booth), Promises Promises (Sheldrake), and in numerous Off-Broadway, regional theater, concert, and TV appearances (including guest-starring on Law & Order, FBI: Most Wanted, Person of Interest, The Blacklist, and multiple seasons of the animated series Courage the Cowardly Dog), Montreal native Paul Schoeffler is soon to be seen back Off-Broadway in a limited five-week engagement of the new play Strings Attached at Theatre Row.

Written by novelist, poet, and playwright Carole Buggé and presented by Pulse Theatre (the Off-Broadway emergence of Pulse Ensemble Theatre – a well-established NYC company that founded and developed Harlem Summer Shakespeare for fourteen seasons), the work, loosely based on real events, features three contemporary scientists – two cosmologists and a particle physicist – on their historic train ride from Cambridge to London in 1999, to see the play Copenhagen by Michael Frayn. En route they discover a theory of the Big Bang and, in this fictionalized account, also reflect on relationships, love, and loss through an existential journey together that merges the world of physics with a love triangle. The appearances of Isaac Newton, Marie Curie, and Max Planck bring in another realm of reality, add insight into their contributions, and inject some earthy humor.

Currently busy in rehearsals, Paul graciously made time to speak with me, to give us an inside look at his role, the show, and what he thinks audiences will appreciate about it.

Since this is a NYC debut and audiences won’t be familiar with it, can you give us your perspective on the story?

Paul: It’s a really REALLY interesting and funny story, in which the three characters are trying to balance being brainiacs with the situations they’re all dealing with in their personal lives. In the first act, my character and his wife lost their son in a train accident, and she’s having an affair with his best friend. In the second act, the roles are reversed: my character is having an affair with his best friend’s wife, and the themes of loss and betrayal are treated differently.

There are also parallels with physics. They’re on the train to see Michael Frayn’s play Copenhagen in London, when their idols in science appear and speak to them. For mine, Isaac Newton is there to help with the deep issues of sex and religion. We like to think of it as Copenhagen meets Noises Off, which Frayn also wrote. It’s all very funny and very involved, in an exacting and challenging process that can’t delve too deeply into science or we’ll lose people; we have to pinpoint it, as Frayn did in Copenhagen. It’s fascinating!

Tell us a little about the real-life character you play.

My character’s name is George; he’s a cosmologist, around 50 years old. He’s very intellectual, pre-eminent in his field, and proprietary about his views – as all the characters are – and he comes from money. I was going to portray him as being a very refined Englishman, but the director told me he should be more blustery, like Boris Johnson, and that works perfectly for him. He’s also very religious. His best friend is a quantum physicist, who’s having an affair with his wife (also a scientist). All three are essentially ‘neck up’ and lacking an emotional vocabulary, but dealing with emotional issues – the affair, the loss of a child – so he’s trying to solve problems he’s not used to, and everything is beginning to fracture. It all comes out eventually, but I don’t want to spoil the ending for anyone, so I won’t say any more than in a scant two hours, there’s science, religion, class, betrayal, loss, and humor.

This seems quite different from many of the other roles you’ve performed. Were you interested in physics before you took on this part?

Not particularly when I was younger, but I’ve found that in the last twenty or so years, I’ve been filled with wonder and awe! With the development of the James Webb Space Telescope, we’re now discovering things we’ve never seen before and wondering if the Big Bang actually happened. Maybe we got it wrong. With astrology in particular, I find it extraordinary how it relates to life, macro and micro, and how the two don’t obey the same laws. They’re trying to find a unified theory, but it has to be aesthetically beautiful. There’s a sense of wonder about it.

How did you prepare for the role?

I’ve been boning up so much on science, and the company has been doing a lot of talking during the rehearsal process. You tend to lose your objectivity when you’re so deeply in character, you lose your ability to step out, so it’s been wonderful and exciting to work collaboratively with this cast and director. I also asked myself, what do I have in common with George? From ages thirteen to eighteen, I went to boarding school in England, so the accent comes easily. I considered how he would deal with his wife’s affair, and because he’s upper-class British, it would be with a stiff upper lip; carry on, suppress your emotions, as in the Pink Floyd song, “Hanging on in quiet desperation is the English way.” And you draw from your own life. I drew from my German-English Dad in terms of being so intellectual and grappling with emotions.

Aside from the entertainment value, is there a specific life-lesson or moral that you hope viewers will take away from the play?

I’ve thought hard about this. For the last six years or so in this country, and maybe throughout the world, we’ve all been divided. But in fact, we’re all interdependent – that’s how nature works. There’s a quote from Benjamin Franklin that says, “We must all hang together, or surely we will all hang separately.” We have to understand how we’re all connected.

In the play, two of the scientists do not believe in God, because religion is not empirical. But my character does; he recognizes that some things are inexplicable. The German scientist Max Planck, whose discovery of energy quanta won him the 1918 Nobel Prize in Physics, noted that if you look at an atom, there must be a force causing it to revolve that way – something we can’t explain. So is there a higher power? There’s wonder in the many things we don’t understand and can’t explain. The show is a mind-bender, and I hope the audience enjoys that and finds it challenging, stimulating, and also funny.

It was truly a pleasure to talk to you, Paul! Thank you so much for giving our readers a sneak peek at the upcoming show; I look forward to seeing it. 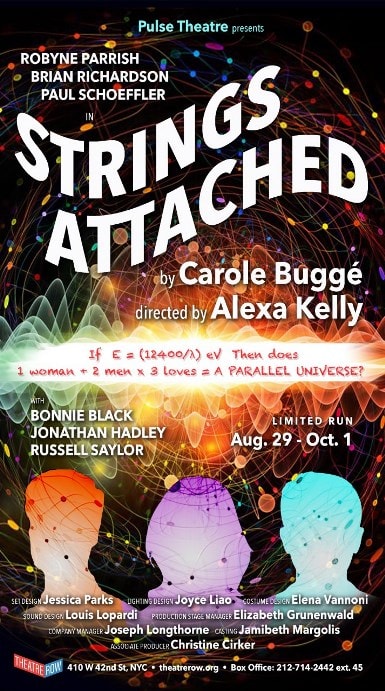