On Sunday, August 21, a roster of Broadway talents will unite at The Green Room 42 for NYC’s fourth annual NF Hope Concert – a great night of music and entertainment that will take place both in person and via livestream, to raise awareness and research funds for the Neurofibromatosis Network, an organization dedicated to families and individuals suffering from Neurofibromatosis (NF). NF is a genetic disorder of the nervous system characterized by tumors, which can grow on any nerve in the body. There is no cure and, until very recently, there has been no treatment, even though it is more prevalent than Cystic Fibrosis, hereditary Muscular Dystrophy, Huntington’s Disease, and Tay Sachs combined.

Founded and produced by the former Jersey Boys star Jeff Leibow and his wife Melody after their daughter Emma was diagnosed with NF at nine months old, the charity concerts take place each year in Las Vegas, Chicago, and NYC. The live events were put on hold in 2020, due to the pandemic, but during that time Leibow produced two virtual concerts featuring such luminaries as Lea Salonga, Betty Buckley, James Monroe Iglehart, Debbie Gibson, Erich Bergen, Dave Koz, and many more to support the cause. Over $1,300,000 has been raised to date for the NF Network and the benefit concerts won’t stop until there is a cure for this disorder and the 128,000 living with it in this country.

In 2021, advocacy efforts funded by NF Hope Concerts played a vital role in federal legislation that provided $25 million for NF research; prior to this, it was about $15 million. With the support of continued funding from NF Network, the University of Wisconsin NF Research Program has made quantum leaps in our knowledge of the disorder; results will be released in a number of upcoming published articles. In 2020, the NF Network’s advocacy lobbying led Astra Zeneca to release the very first FDA approved drug to treat the most invasive and dangerous type of NF tumors, the plexiform neurofibroma. Additionally, Stage 2 clinical trials are underway for another potential treatment for plexiform neurofibromas by SpringWorks Therapeutics (a rare disease pharmaceutical company owned by Pfizer). 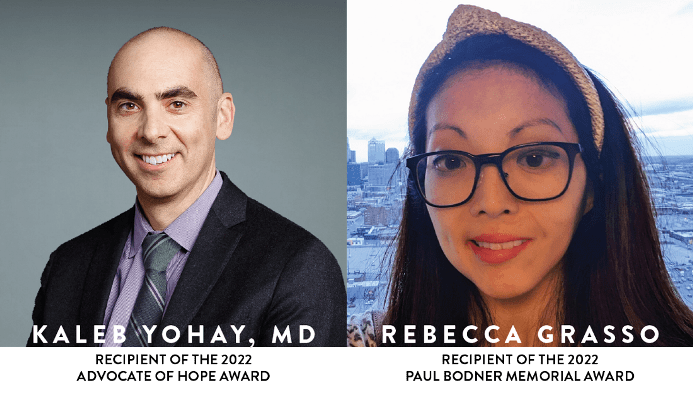 Every year the NF Hope Concert also recognizes people who have an impact on the lives of those in the NF community. This year Dr. Kaleb Yohay from NYU Langone Medical Center will receive the Advocate of Hope Award (presented to someone outside the NF community who has dedicated themselves to bettering the lives of individuals living with NF). Receiving the Paul Bodner Memorial Award (presented to someone within the NF community whose courage has inspired those around them) will be Rebecca Grasso, who, following nine surgeries and loss of hearing due to NF, completed her doctorate degree, works as a Physical Therapist in Albany, and is determined to lead a full and productive life.

This year’s NYC fundraising concert brings Leibow together with Jenn Gambatese (Mrs. Doubtfire; School of Rock; Wicked), Nasia Thomas (Caroline or Change; Beautiful), Tari Kelly (Mr. Saturday Night; Groundhog Day; Something Rotten), Jamie Karen (Man of La Mancha; Jersey Boys), and Jonathan Rayson (Little Shop of Horrors). They will be joined by up-and-coming Broadway artist Avery Rausch, a past recipient of the Paul Bodner Award and someone who, through Deaf West, wants to dedicate himself to the hearing impaired using theater. Both he and his mother have NF 2.

“The Broadway community is a very close-knit family,” said Leibow. “Even so, I am always in awe by the number of performers, who want to help make the NF Hope Concert a success in every way possible.” As a thank you to the performers who so generously contribute their talents to this cause and to help support those in the Broadway community that suffered during the pandemic, the NF Hope Concert contributed $5,000 of proceeds from their 2021 virtual events to The Actors Fund’s COVID Relief Fund.

For more information about the NF Network, watch the video below: