To conclude the 21st season of the historic Town Hall’s popular series Broadway By The Year, creator, writer, director, and host Scott Siegel traced the momentous contributions of dance to the Broadway musical. Choreographed by eight-year regular Danny Gardner and performed by a top-notch cast of Broadway singers and dancers and the Broadway By The Year Dance Troupe and Chorus, the spectacular one-night-only event was the series’ most ambitious concert ever, and everyone in the cast brought their A-game to the stage and closed the 2022 season with a bang.

The fast-paced show opened with Gardner leading members of the BBTY Dance Troupe in a lively song and dance performance of “New York, New York” from the musical On the Town, backed throughout the night by the terrific trio of music director Ross Patterson on piano, Don Falzone on bass, and Eric Halvorson on drums – all of whom have been with the show since the beginning and are expert at delivering the variety of styles of Broadway show tunes.

Siegel then entered and provided introductions, historical commentary, and personal observations before each number from his lectern. He began by noting that dance is central to most Broadway musicals, that George M. Cohan can be credited with creating modern Broadway song and dance, and that shows continue to reflect what’s in vogue at the time, as was seen in the following non-linear segments, shining a spotlight on memorable numbers in every genre, from tap, ballroom, and ballet, to freestyle jazz and post-modern pop from the ‘60s into the new millennium, through the preeminent contributions of such acclaimed choreographers as Cohan, Fred Astaire, Jerome Robbins, Bob Fosse, Andy Blankenbuehler, Sergio Trujillo, Jerry Mitchell, and more.

There were songs about the love, importance, and emotional expressiveness of dance, with blockbuster solos by stage and screen star Kelli Barrett (who brought her glorious operatic soprano to “I Could Have Danced All Night” from My Fair Lady), Jillian Louis (a last-minute replacement on “The Music That Makes Me Dance” from Funny Girl, for which she had no rehearsal time or sound check, but brought down the house with her show-stopping performance), and Tony nominee Jeannette Bayardelle (turning in a powerhouse fusion of pop, rock, and R&B on the hit “I Wanna Dance with Somebody” by Whitney Houston, who, Siegel assumed, with the prevalence of jukebox musicals on Broadway, will undoubtedly be the subject of one soon).

Other numbers featured astonishing vocal and tap solos by Gardner (making great use of a cane on “Give My Regards to Broadway” from Little Johnny Jones), Luke Hawkins (whose emphatic singing and dancing on “I Can Do That” from A Chorus Line led Siegel to admit, “I can’t do that!”), and special guest Kendrick Jones (who amazed with his sensational performances of “Dr. Jazz” from Jelly’s Last Jam and “Where’s the Beat?” from Bring in ‘da Noise, Bring in ‘da Funk, in a spoken-word a-cappella master-class fusion of the signature moves of the greatest original tap dancers of the past).

And all the group numbers delivered an explosion of song with “a big helping of dance” in a full range of styles, from old standards to the latest Broadway smashes. The classics included the flirtatious “’S Wonderful” from Funny Face, with Gardner singing and dancing with a microphone stand until he feigned surprise by Mary Donnelly joining him, and the BBTY Dance Troupe adding to the fun with an exhilarating chorus line; real-life couple Barrett and Jarrod Spector singing and feeling the amorous duet “The Best Things Happen While You’re Dancing” from Irving Berlin’s White Christmas, with Gardner and LaTarika Pierce further enacting the song with their romantic dance; and Rema Webb bringing her fabulous voice to the 1926 feel-good song “Bye Bye Blackbird,” reimagined in the Broadway musical revue Fosse, with the BBTY dancers perfectly capturing the unmistakable style of the legendary Tony-winning choreographer, with staccato hip thrusts and face turns, fluid and angular steps and spins, arm and hand extensions, hat tipping, finger snapping, and jazz hands (which, as Siegel pointed out, Fosse didn’t invent but re-popularized), as flawlessly recreated for the show by Gardner.

Siegel and company also brought us up to date with more modern numbers from recent and current musicals. Bayardelle encouraged the audience to clap along to her strong full-bodied soulful spin on Abba’s “Dancing Queen” from Priscilla, Queen of the Desert, with Hawkins then adding an interpretation of the song in tap. The Tony-nominated Spector did his famed tenor rendition of “Can’t Take My Eyes Off You” from Jersey Boys (in which he portrayed lead singer Frankie Valli for a record-breaking 1500 performances) and performed a duet with Erika Nicole Mesa, backed by the BBTY Chorus, on “You Can’t Stop the Beat” from Hairspray, accompanied on both songs by the BBTY Dance Troupe. And among the highlights of a show filled with nothing but highlights was the outstanding staged version of “The Room Where It Happens” from Hamilton, led by the masterful Adan Gallegos (who serves as an usher there and was also named one of BBTY’s Rising Stars) as Aaron Burr, supported by Luana Psaros, Pedro Coppeti, Matthew Harter, and the BBTY Chorus and Dance Troupe, all impressive in their performance of an acclaimed number from one of the most beloved award-winning musicals currently on Broadway.

The entertaining and educational concert (which included apropos costumes and accessories to set the mood for each of the songs and dances) closed with a high-spirited uplifting performance of the iconic “I’ve Got Rhythm” from Anything Goes, featuring Gardner, the BBTY Dance Troupe, and the entire company, leaving everyone in the enthusiastic house with a smile on their face, wanting more, and looking forward to what will come next in Broadway By The Year’s 2023 season. 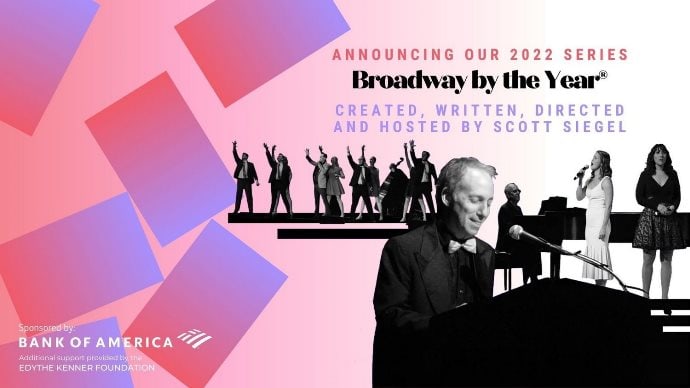