When theaters were shut down by COVID-19 in 2020, Tony-winning actor Jefferson Mays and director Michael Arden brought their one-man adaptation of Charles Dickens’ beloved 1848 holiday classic A Christmas Carol (which premiered at LA’s Geffen Playhouse in 2018) to the stage of NYC’s United Palace that October. There, before an empty house, Mays’ live performance was filmed and made available for streaming, to the delight of audiences and the acclaim of critics everywhere. When I reviewed the resounding online success (and one of the most accomplished digital theater offering of the pandemic hiatus), co-written with Susan Lyons and co-conceived by Arden and designer Dane Laffrey, I called it a “tour-de-force,” “perfection,” “brilliant,” “impeccable,” “flawless,” “riveting,” “stunning,” “seamless,” and “extraordinary,” among other superlatives. For the current live in-person limited Broadway engagement at the Nederlander Theatre, I can add “even more so” to all of that. Yes, it’s that good.

As in the online version, the supremely talented Mays turns in an unparalleled performance as The Mourner, who alternates between narrating the episodes and embodying the miserly Ebeneezer Scrooge and more than 50 of the other characters and spectral presences from Dickens’ beloved novella to convey the didactic tale of generosity, kindness, love, and redemption through thoroughly mesmerizing storytelling. Each of the iconic figures – male, female, adult, child, living, and otherworldly – is given a distinctive and readily identifiable characterization, as the American actor changes his authentic English accents, voice, and speech patterns, physical demeanor, facial expressions, psychological and emotional attitudes to suit the unique personalities and their importance to the background, catharsis, and transformation of the hard-hearted Scrooge into a man of empathy and compassion.

Under Arden’s expressive and compelling direction, Mays’ transitions are fluid and faultless, his delivery and timing meticulous, and his ability to convey the time-honored holiday tradition in a rich and efficiently condensed 90 minutes, while commanding the stage and captivating the audience for every second, is unerring. He actively moves around the space, momentarily disappears into the darkness, then suddenly and unexpectedly re-emerges, sometimes surprising, sometimes amusing, and sometimes startling the audience, generating both our laughs and our gasps. He is equally adept at assuming the menacing supernatural intonations and frightening appearances of the ghost of Jacob Marley and the spirits of Christmas Past, Present, and Yet to Come in dialogue with Scrooge, as he is at capturing the life-changing sweetness and irresistible charm of Tiny Tim, and the defining qualities of all the other characters, familiar since the Victorian era, who had an impact on the protagonist’s metamorphosis from mean and lonely to benevolent and joyous, as the mood shifts from “Bah, humbug” to “God bless us, Every One!”

Mays’ exceptional performance – a veritable masterclass in acting – is equaled by the show’s transporting artistic design. Lighting by Ben Stanton creates an eerie and tenebrous ambiance appropriate to the theme and the era, engulfed in spooky haze and preternatural colors, illuminated by the lighting of matches and candles, casting creepy shadows and silhouettes on the walls, then crashing into total foreboding darkness, or capturing the warmth of happy homes, holiday dinners, and parties, and glowing with the electrifying brightness of the uplifting ending. Sound by Joshua D. Reid further enhances the dramatic atmosphere with chiming clocks and ringing bells, occult echoing voices, loud and abrupt booms, and the merry noise of Christmas celebrations. The only anachronistic note is a post-modern indie-pop song that contrasts with the overall historicizing tone.

Period-style costumes by Laffrey, with hair and make-up by Cookie Jordan, have the genuine look of the 19th century, and his ingenious scenic design, with elements that rotate, rise, drop, and appear out of the darkness, creates the semblance of an antique Victorian environment. The efficiently changing set also reflects the status and mindset of the different characters, from the sparse office of Scrooge to the luxurious furnishings and decorations of his jovial nephew Fred and the genial merchant Fezziwig, with whom he apprenticed, to the humble home of the Cratchits, who don’t have much but appreciate what they do. It is supported by Lucy Mackinnon’s dazzling trompe l’oeil front- and rear-screen projections, which provide virtual 3-D amplifications of the realistic objects, backdrop, and activities, and immersive experiences in the unearthly components of the show that extend beyond the stage and into the house. Along with the expert special effects is The Spectre, a fearsome figure that manifests from a shadow to a macabre physical presence (unnervingly played by Danny Gardner).

Dickens’ A Christmas Carol remains one of the theater’s most treasured holiday shows, and this adaptation takes the affecting story to new levels. It hits the heights of acting, direction, and design, and represents the very best of Broadway. Be sure to give yourself the gift of this must-see show and peerless performance. 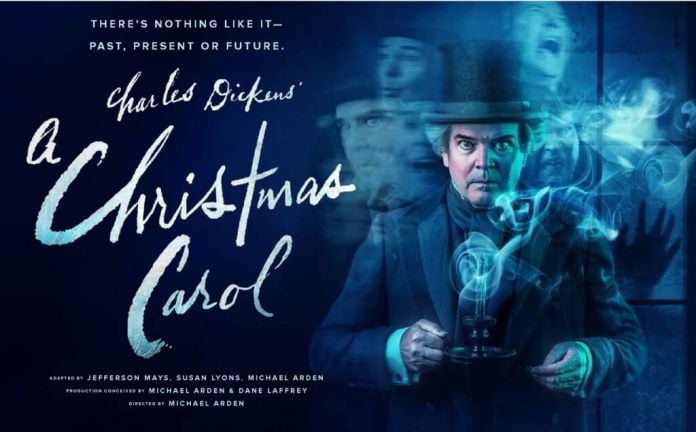 A Christmas Carol plays through Sunday, January 1, 2023, at the Nederlander Theatre, 208 West 41st Street, NYC. For tickets (starting at $79.75, plus fees), go online. Masks are optional but recommended.