In a goofy high-energy mash-up of then and now, following in the footsteps of Something Rotten and Six, Shakespeare’s classic tragedy Romeo and Juliet has been re-envisioned as a coming-of-age jukebox musical rom-com with a feminist twist that postulates what might have happened if Juliet didn’t do herself in over Romeo, if she were 22 instead of fourteen, and if Will’s wife Anne Hathaway had input into the story, to give Juliet (and herself) the empowered future she could have had (if 1597 merged with today).

After its pre-pandemic Olivier Award-winning engagement in London in 2019, & Juliet has arrived at Broadway’s Stephen Sondheim Theatre with a sketchy book by Emmy-winning Schitt’s Creek writer David West Read, tying together a score of chart-topping pop hits of the 1990s and beyond from five-time Grammy-winning producer and songwriter Max Martin and friends, animated present-day choreography by Emmy winner Jennifer Weber, and a youthful company of 25, fifteen of them making their Broadway debuts, under the unbridled direction of Luke Sheppard.

Created in the metatheatrical format of a play-within-a-play, the narrative follows the active rewriting of Juliet’s journey, here leaving Verona for emancipation and a second chance at love in Paris, along with the relationships of her non-binary BFF May and her new French fiancé François DuBois (whom she calls Frankie DeBoy – “but what’s in a name”), his father Lance and her nurse Angélique (who had a prior connection), the womanizing Romeo (who also didn’t die) and his many past lovers, and Will and Anne (who interpolates herself into the musical reimagining as Juliet’s other BFF April – resulting in the trio of self-realizing traveling besties April, May, and Juliet, and an indication of Read’s brand of humor), as the collaborating playwrights reappear throughout the show to do battle over the content and direction of their ongoing deconstruction of the original and issues in their own unequal marriage.

There are silly references to Shakespeare and his canon, over-the-top portrayals of the comic characters – especially Betsy Wolfe’s Anne, Melanie La Barrie’s Angélique, and Tony Award-winning operatic baritone Paulo Szot’s Lance – and an obvious socio-political message, made in a jokey campy style, of be who you are, love who you love, and don’t be “a douche” – lessons finally embraced by Philippe Arroyo’s dorky, shy, and insecure François; Michael Iván Carrier’s sensitive May (filling in beautifully for Justin David Sullivan at the performance I attended); Lorna Courtney’s increasingly confident Juliet; Ben Jackson Walker’s rock-star Romeo and Stark Sands’ well-played Will, who make the fast-track transition from egotistical to apologetic in their sudden awareness of the love and appreciation they feel for Juliet and Anne, who boldly challenge them and their now dated androcentric attitudes.

But the main raison d’être for the jukebox musical is to feature the pop anthems of Martin (the man behind the most #1 songs in this century), around which the story is built, underscored by the prominent placement of an actual jukebox on stage, just in case you didn’t get it. The cast has fine voices and clearly relishes performing the songs, dances, and humor they’ve been given with a vibrant jeunesse, in a show that’s to be appreciated more by fans of its retrospective set list of 29 numbers than for its plot points.

Among the musical highlights, and the best retrofits with the theme and characters, are Anne telling Will, regarding her script revisions, “I Want It That Way,” May noting “I’m Not a Girl, Not Yet a Woman,” Juliet (who only knew Romeo for four days and then got engaged as quickly to François in Paris) recognizing “Oops! . . . I Did It Again,” calling out her welcome independence from Romeo with “Since U Been Gone‚” and belting out her new-found liberation in “Roar,” and the DuBois family (or DeBoy, as Juliet immediately and prophetically mispronounces the surname) getting their Boy Band back together and performing “Everybody (Backstreet’s Back)” – which is the most far-fetched but also the most entertaining of the songs, with ebullient musical supervision, orchestrations, and arrangements by Bill Sherman and music direction by Dominic Fallacaro, and a wink at Shakespeare’s comedic use of disguises and mistaken identities.

The offbeat anachronisms that drive the show also define the extravagant artistic design. The set by Soutra Gilmour, costumes Paloma Young, hair, wigs, and make-up by J. Jared Janas, and video and projections by Andrzej Goulding are a mix of Shakespeare’s time, Paris through the centuries, and our own post-modern era, energized to the max with high-octane lighting by Howard Hudson and sound by Gareth Owen. And of course, as with all happily ending jukebox musicals, there’s confetti. 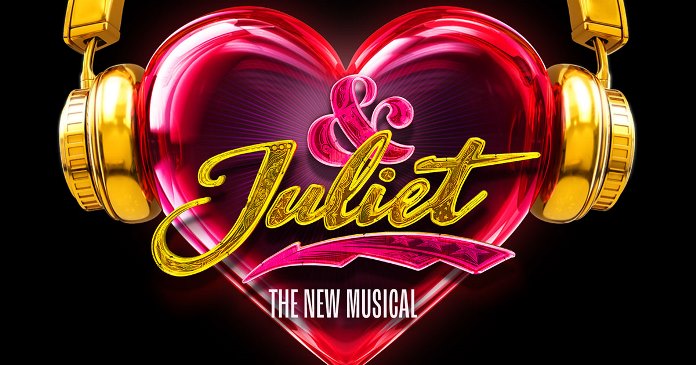