You all know what improv is. It’s a spontaneous performance by talented actors that is produced out of suggestions they take from the audience. The actors often turn these audience suggestions into wildly improbable and funny skits.

But there is another kind of improv. In this kind of improv, the suggestions offered for performance consist of events from the audience’s lives. The actors take these offerings and with sensitive and respectful skill, transform them into well-crafted, evocative one-act plays. That’s what happens at a Playback Theater performance.

In this kind of performance members of a community gather and by sharing their stories and seeing them enacted on the spot learn about one another and the challenges, joys, and triumphs they have experienced: experiences that have brought them together in this place.

On December 30, 2022, at 6 pm at Anacostia Arts Center (1231 Good Hope Road SE, Washington), the Youth Playback Group at Project Create will present Stories from the Old and Stories from the Young. In this performance, members of a multi-generational audience will be invited to share stories of their lives from the perspectives of their various generations and have those stories performed. The event is sponsored through the collaboration of Verbal Gymnastics, Valley Place Arts Collaborative, and Project Create, three organizations committed to the strengthening of community in Anacostia. The performance (admission: $5) will feature a group of young artists who have been cross-training in Playback Theater under the instruction of Anacostia-born-and-raised actor, poet, and writer John Johnson. Having recently returned from conducting Playback Theater workshops in Edinburgh, Scotland, Johnson merges his fledgling actors with older, more experienced Playback performers for this performance.

Johnson’s time in Edinburgh was part of an exchange. The company Glass Performance came to the United States to share their successful project in which grandfathers — a resource among us who are often overlooked — were provided a platform and a process through which to share their stories. Johnson, in turn, went to Scotland and shared his passion and expertise in using Playback Theater.

Ask director Johnson what Playback Theater means for him and he doesn’t hesitate: “My work in Playback means everything! I’m a naturally curious person.  I like to learn about people.  I find that I never remember people’s names. But I always remember their stories. It’s clear to me that this work of connecting people through their stories is work I am meant to do.  And I’ll keep doing it until I’m called to do something else.”

Nobody knows who, or, for that matter, whether, anyone will show up to a Playback performance.  No one knows what stories the people who do show up will carry with them or, of those stories, which ones they will choose to tell.  But the ritual structure of a Playback Theater performance allows for that variability.  The emcee (called “Conductor” in Playback) engages the audience with questions about their day, their likes and dislikes: why they decided to attend this show.  A musician may play some evocative music during this process. Eventually, someone from the audience may feel comfortable enough to volunteer to tell a story (the “Teller”).

Now the Conductor shifts her inquiry to focus on the Teller. The Conductor will try to elicit enough details of the story to allow the actors to produce an enactment that provides clarity, for both actors and audience, and honors the Teller’s original lived experience.

This is where everybody usually holds their collective breath. Will this enactment reveal echoes of meaning? Or will the efforts of the actors fall flat?

After the playing back, the Teller is given the chance to share with the audience and the presenters their response to the enactment of their story. They then return to their place in the audience. And the next Teller steps forward. This process continues until all the stories that the people gathered for this evening need to tell have been told.

This performance will not be the first time Playback Theater has been seen in DC.  In the 1990s, DC Playback operated out of the District of Columbia Arts Center under the direction of psychodramatist Jeffrey Yates.  That company remained operative into the early 2000s offering monthly public performances in the Adams Morgan neighborhood.  During the 1990s I formed a company, Positive Image Performance Project, which specialized in eliciting and performing the stories of people who were affected by HIV/AIDS.  Kimberly Ratteley’s Synergy in Action company used Playback in corporate environments and Maryam Foye supported women’s empowerment efforts through her Hissing Black Cat company. At Sidwell Friends School, Timothy Reagan established Vertical Voices and Friendly Rewinders, Playback Theater companies composed of middle school and high school students respectively. In addition to teaching Playback Theater, Dr. Reagan used the form to explore a variety of academic, spiritual, and social issues in the school community.  The form has proven flexible, responding to the creativity of the people who take it up, and being performed all over the world.

The intimate, unrushed sharing of stories that happens in a Playback Theater performance often works as a contradiction to the anxiety we can experience as a result of being subject to 24-hour news and TikTok cycles. The repeated despair we often hear from some infotainment streams might have us believing that while we may live in the same city, we’ll never be able to communicate or collaborate in any meaningful way with one another.

On December 30, the Youth Playback Theater Group at Project Create will offer us the chance to experience living snapshots of the contrasts in the ways our city’s rapid changes continue to manifest in the lived experiences of our younger citizens versus our older citizens.

Who knows what possibilities may arise from a group of folks gathered like this? 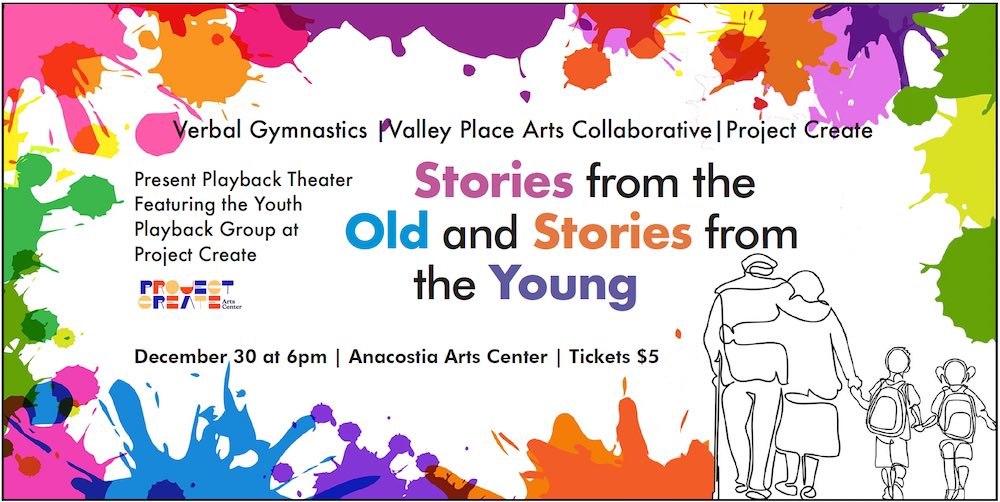 Stories from the Old and Stories from the Young will be presented by Youth Playback Group at Project Create on December 30, 2022, at 6 pm, at Anacostia Arts Center, 1231 Good Hope Road SE, Washington, DC. Purchase tickets ($5) online.

COVID Safety: All performers are required to have a negative COVID test hours prior to the performance. Masks will be available for audience members.