A community can be a lot of things: a group of people brought together by an organization, a school, a neighborhood, or a shared passion. The DC region, with its vibrant economy and smart, savvy residents, is home to some of the nation’s best community theaters. The 17 organizations that caught our writers’ attention this year represent the best of what our DC area can do when folks rally around a shared love of theater.

But look closer and you’ll see the differences in these communities. Some are traditional community theaters where our residents nurture their love of theater as volunteers. Some are venues for future pros to cut their teeth and get their first artistic experiences. The DMV boasts a number of exemplary training programs for young artists who create incredible work, all for the love of the art. And let’s not forget universities, where future pros learn the ropes. Even among the region’s universities, each community is unique. Making our list for the first time this year is the Masqueraders program at the U.S. Naval Academy, a group of thespians who balance their love of theater with both academic and military duties.

Together, these diverse communities make the DMV a place I am proud to call home. 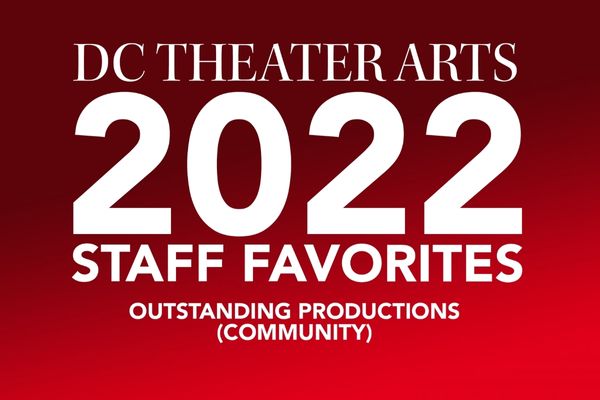 Art at Colonial Players of Annapolis
Yasmina Reza’s 1994 comedy Art about a man who buys a completely white painting for a lot of money offers a funny situation while also making thoughtful observations on art, philosophy, and friendship. Debbie Barber-Eaton’s direction moves the play along quickly yet carefully, the cast guiding us to a touching and unexpected ending. Everything comes together for a night of laughter, but with plenty to think about afterward. —Charles Green
DCTA Review

Firebringer at Dominion Stage
Dominion Stage’s Firebringer is both goofy and wise. Set in an imagined prehistory when homo sapiens dwelled in caves and had not yet discovered fire, Firebringer is peopled with a charming cast accompanied by a crack orchestra who deliver a lighthearted tuner that not only sends up society but points to a better world. —John Stoltenberg
DCTA Review

Freaky Friday at Colonial Players of Annapolis
Two years after it was supposed to open, the Colonial Players finally began a run of Disney’s stage version of Freaky Friday, and it is freaking hilarious. This gem of a musical, written by Bridget Carpenter with music and lyrics by Tom Kitt and Brian Yorkey, managed to engage, entertain, and crack up the entire multigenerational audience in the theater-in-the-round. The show, directed by Ron Giddings, immediately immerses us in the world of Katherine (a stressed-out single mom about to get remarried) and Ellie (her disgruntled, angsty teenage daughter). The stage magic was truly exceptional, with so much to look at, thanks in part to choreography (Ron Giddings) and set design and decoration (Lindsay Zetter), and the “Prologue/Just One Day” that immediately drops you into the middle of their hectic modern-day world. —Sarah Shah
DCTA Review

Godspell, Sandy Spring Theatre Group at Arts Barn
The house was packed on Sunday when I saw Sandy Spring Theatre Group’s production of Godspell. The audience was one of the most enthusiastic I have ever seen at the Gaithersburg Arts Barn and I wondered why. Perhaps it was the score. Stephen Schwartz’s music for Godspell was groundbreaking when it hit the scene in 1971, becoming one of the few Broadway musicals to break through to a wider, mainstream audience. Or perhaps the crowd was energized because word had gotten out that this production, helmed by Director Robert Leembruggen, has enough heart and soul to warm the cockles of heathens and cynics. With colorful homespun costumes, earnest performances, and ensemble-enriching choreography (by Stephanie Wesley), this is the little production that could. It’s also one of the best community theater shows I saw this year. —Nicole Hertvik
DCTA Review

Joseph and the Amazing Technicolor Dreamcoat presented by The Arlington Players in collaboration with Avant Bard Theatre and Encore Stage & Studio
at the outdoor amphitheater at the Lubber Run Community Center in Arlington
In a first-ever collaboration, Avant Bard Theatre, the Arlington Players, and Encore Stage and Studio presented a free concert production of Joseph and the Amazing Technicolor Dreamcoat at the Lubber Run Community Center amphitheater. The 60-minute concert staging of the Andrew Lloyd Webber musical featured enjoyable performances; however, it was the joyful energy of the entire cast, highlighted by the children’s choir in their brightly colored T-shirts, that made this a delightful evening in a picture-perfect setting. —Caroline Bock
DCTA Review

King Hedley, II at Dominion Stage
A production illuminated by six brilliant performances. Dominion Stage’s production is up to the material. Director Rikke Howie Lacewell, with her considerable experience in August Wilson’s plays, keeps the show’s momentum moving and has clearly established excellent ensemble playing among the cast members, evident, for example, in scenes in which some characters maintain their interaction with one another silently while the focus is on dialogue between other characters. – Bob Ashby
DCTA Review

Les Miserables at Ovations Theatre Company
Under the leadership of Darnell Morris, Ovations Theatre is quickly becoming one of the region’s leading training programs for young, aspiring theater students. This year’s season of productions was of the typical high caliber that we have come to expect from Ovations. Les Miserables, an Ovations production that we previously admired in 2018, is our pick for the best of the bunch this year. Once again, Morris and his team of young thespians prove that young people can tackle big ideas. —Allie Press
DCTA Review

Little Women at Montgomery College Summer Dinner Theatre
The cast of Little Women is oozing with talent and includes an American Idol contestant (Evan Napier as Mr. Laurence) and a performer destined for Broadway (Allison Fitzgerald as Jo). This production was a delightful whirlwind that I was glad to be a part of and would gladly see again. How lucky we were to have this musical treasure right here in Rockville, Maryland. —Sarah Shah
DCTA Review

Newsies at The Arlington Players
The music fills the heart to bursting, and the dancers are inspiring. The Arlington Players’ Newsies directed by Emily “EJ” Jonas is overall an impressive, lively show that has fantastic performances from the entire ensemble, who sing and dance their faces off.- Kendall Mostafavi
DCTA Review

Ragtime at Sterling Playmakers
The visual richness of Sterling Playmakers’ production echoes the sweeping ambitions of the show’s story, which follows three groups — African Americans, upper-class whites, and Jewish immigrants — as they navigate racial and cultural unrest in turn-of-the-century New York, and come to understand that the “American Dream” is not as universally available as it pithily suggests. The Sterling Playmakers’ production showcases costume design on an enormous scale, an extensive cast, and a full orchestra that pulls off a variety of musical styles with ease as it tells a timely tale about revolution and evolution amid tragedy and triumph. —Alexandra Bowman
DCTA Review

SHOAH at Fauquier Community Theater
SHOAH, by Claude Lanzmann and adapted for the stage by Dr. Harry J, Kantrovich, is a Holocaust documentary 11 years in the making. Lanzmann conducted interviews dividing Holocaust witnesses into three categories: survivors, bystanders, and perpetrators. SHOAH embodies the voices of a dwindling generation that experienced the worst that mankind has ever displayed. SHOAH is an example of the impact that community theater can have in presenting stage adaptations of documentaries and historical events, especially the tragedies of the Holocaust, lest we forget. —Aimée O’Grady
DCTA Review

Something Rotten! at the Little Theatre of Alexandria
Much like the Black Plague, the joy that the Little Theatre of Alexandria’s production of Something Rotten! emanates is unexpectedly infectious. The show is a Renaissance feast for the eyes, ears, and whatever organ processes jokes, thanks to set, lighting, and costume design that match the musical’s tone — a farce that both riffs on and celebrates traditional tropes — in addition to irresistibly bright performances in both leading and ensemble roles. —Alexandra Bowman
DCTA Review

Sweat by the Masqueraders at United States Naval Academy
The Masqueraders is the all-volunteer theater troupe of the United States Naval Academy. As such, we can safely say that these thespians are doing something unique to the DMV when they step onstage: balancing their love of theater with military studies and the rigorous demands of the nation’s top naval training institution. This year, the Masqueraders tackled Lynn Nottage’s Sweat, an emotionally powerful show about factory workers in Reading, Pennsylvania. The play addresses class, race, gender, and capitalism. With powerful performances and winning direction by Christy Stanlake, the Masqueraders’ production raises thought-provoking questions that remain relevant today. —Charles Green
DCTA Review

When Boys Exhale by Caged Bird Productions at Anacostia Arts Center
This play is a fervent, authentic, and hysterically funny testament to — and celebration of — the challenges and achievements of queer Black men as their lives are played out in this early part of the 21st century. This production, despite its dramatic and moving content, becomes much more like a party than a wake: a party hosted by members of the Black queer community for members of that community and open to anyone in the mood to celebrate life. —Gregory Ford
DCTA Review
What it means ‘When Boys Exhale’: A Q&A with Anthony Green by John Stoltenberg

Wonderland by Young Artists of America at Strathmore
The Young Artists of America production of Frank Wildhorn’s rarely performed Wonderland was a testament to the versatility and creativity of this organization, celebrating its 10th anniversary year. The show featured 21 musical numbers and gave us a glimpse at young talents one hopes will soon find their way to professional stages. Over 160 young singers, dancers, and musicians filled the Strathmore stage with talent. —Caroline Bock
DCTA Review