If you have two hours to spare this beautiful Sunday afternoon, and want to enjoy a world-class venue in a beautiful performing arts space, hurry to reserve your family seats at the Hylton Performing Arts Center on the Manassas Campus of George Mason University for Dancing in the Wings. The final performance is at 3 PM. 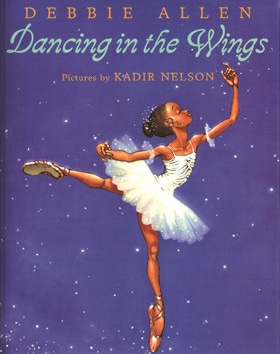 A ballet-themed play, lightly autobiographical and written by Debbie Allen, with music and lyrics by her brother Andrew “Tex” Allen, Grammy Award-winning James Ingram and Debbie Allen; directed and script adapted by Tyrell Lashley (Director), Dancing in the Wings is sure to be a strong crowd-pleaser for family audiences, especially those with girls and boys, age 8+ and older.

This is a great story for young girls who have grown faster than their peers — particularly boys, and are ostracized by their peers because of it. The play’s main character, Lil Sassy (Asjah Benson) and Big Sassy (Aria Austin), has three strikes against her – too long legs, too large feet, and even a too big mouth which she deftly uses to fend off her teasing classmates and young brother Hughie’s (Tre’Shawn Jones) incessant put-downs. Her quick wit, humor, and in-your-face-attitude work for a while but she still yearns to become a ballerina and be accepted by everyone. Sassy usually dances in the wings off stage, but fortune intervenes and she finally gets her chance to dance on stage. What will happen now?

This play is inspiring because it tells us that we should be happy with ourselves and the highly individualistic, interesting talents we are each born with. While the basic story line is about perseverance and accepting diversity as good – even in one’s physical characteristics –  our main character realizes another lesson, which is that it’s good to stand out sometimes. Asjah’s performance highlights Lil Sassy’s struggles with body image, self esteem, feeling awkward, and continued resistance to being bullied, particularly by three Bad Girls. As we see, some time elapses as Big Sassy endures this negative treatment.

As the play begins in an Inglewood, California neighborhood, the language is quick, expressive; some may reason that insulting one another, criticizing each other’s appearance, talent (or lack thereof), and just generally having a negative attitude is inappropriate. However, the dialogue realistically reflects that of many peers in this approximate age range. Some parents may find that there is a bit more negativity and name-calling that might be comfortable for their younger children, but who among us cannot recall at least one person in school who was bullied or a bully themselves? Can teasing be considered bullying? I believe it is. Indeed, it has now become the norm for parents and school-age children alike, to sign off on school papers stating that they understand and will abide by a Code of Behavior.

In Act I the stage comes alive with rhythmic music and the pulsating motion of Dancing Ants (Chelsea Campbell, Nya Harris, Kyleah Martin, Chloe’ Mitchell, and Jacqueline Mitchell); and an ensemble of Bad Girls (Angel Pratt, Samantha Black, and Arielle Brown), who all, at one time or another tease, taunt and laugh at Sassy, the big feet, long legged clumsy dancer. As I listened, I thought, “Bad Girls with powerful, seemingly angelic, melodic voices with behaviors that were not angelic at all.”

Asjah Benson (Lil Sassy) speaks her lines clearly, with a mesmerizing cadence, never missing a single word, and having exemplary stage presence to boot is enough to put this fine young actor over the top. At the tender age of 9, she delivers a star performance which I believe will guarantee her even more challenging roles in the future. Asjah has vim, vigor, and a jazzy delivery that is quite delightful. Under a cameo spotlight, Asjah punctuates with jazzy, Beyoncé-like attitude:

“Ever since I was born and could see
Everywhere I looked, I saw dance.
In the clouds as the wind blew them across the sky,
In the ripples on a pond,
Even in the sea of ants marching up and down their hills.
Dance was all around me. Dance was me.”

By Act II, Aria Austin (Big Sassy) A tall, agile dancer, harboring more than a touch of sass, manages to deliver push-backs on put-downs, displays of bravado, and one-ups to all comers. As if being bullied by classmates isn’t enough, she struggles with should she or shouldn’t she try out for the ballet? Aria delivers a fine performance, easily accessing her natural optimism when encouraged by her uncle, Isaiah Player (Uncle Redd) to value her height, using it to her advantage. As most uncles do, Isaiah encourages Sassy by reminding her of her true worth and encouraging her to believe in herself and disregard what others say. Breaking out into song, he delivers a follow-your-own-path bluesy rendition, “I’m a plumbin’ man!” that assures Sassy that being tall is an asset not a liability.

Mona Austin (Mama): They say, “the apple doesn’t fall too far from the tree” and where there is talent in the progenitor there is talent in the offspring. Such is the case with Mona’s strong acting and mezzo soprano vocal delivery. Mona strikes an appropriate tone of sympathy and empathy for her daughter Sassy’s trials. An encourager, she gives Sassy the nudge she needs to believe in herself.

Deja Smith (Ms. Debato/Plumette) supported by Kyrai Martin,Christina Moore and Deja Smith (The Plumettes) give a rousing performance complete with hip-swinging syncopation which elicits laughter and amusement from the audience. Their glittering close-fittings costumes add to the enjoyment.

Principal Dancers (Faith Cole, Deja Dozier, Daija Edwards, Kay Harris, Kyrai Martin, Rachel Roessel, and Kyle Sanders) provide a seamless performance through both acts and changing scenes. The natural beauty of ballet transforms the dancers whether they are beginners, intermediate or advanced. One standouts was Rachel Roessel, whose tendu (pointing of the toe) movements are done with grace and ease. For the jazz dance movements kudos to Faith, Deja, Daija,and Kyrai. Kyle Sanders gracefully manages the lone role of male ballet dancer, doing double duty throughout both acts. His efforts enhance the ballet and culminate in an impressive performance.

Not to be outdone by ballet performances — or don ballet tights to support Kyle, however, Football Teammates (Gabriel Arrington, Jordan Cannon, Juwan Hill, and Tra’shawn Jones), display a mélange of hip-hop dance steps including old school twists and turns, and step dancing, which compliments the teen Step Team’s (Eboni Freeman, Alexis Griffin, Taylor Hill, Jayla Roberts and Brianna Thompson) moves. The rhythm is electrifying; the audience is rapt, swaying back and forth to the syncopation. Several people shout out in encouragement. I am loving it, as well. I thought that it was intriguing that Debbie Allen wrote various forms of dance besides ballet into her play. My conclusion is that she loves dance, period.

The take away from Allen’s play is that although Sassy comes to places in her young life where it gets difficult to stand up for herself, with a sassy spirit, she soldiers on and is able to remember her talent, and remember her dream. This play encourages all kids to remember their dreams.

Under the direction of Music Director Angela Somers standouts were young Sassy singing “Dancing in the Wings” and the boys’ rendition of “I Like the Girls” which touched on sexual maturing.

Director Tyrell T. Lashley effectively uses Lil Sassy’s spotlight narration throughout the play; coalesces multiple things going on at the same time — the playground scene of skipping rope, basketball practice and kids just hanging out. Under his capable direction, he accomplishes the task of keeping the play realistic and moving. I wondered if the curtains could have allowed for us to see Sassy actually dancing offstage, even while other actors were center stage. Realizing the casting limitations of community theater, at least one or two more male dances were needed to balance out the preponderance of girl ballerinas. Lashly did an admirable job.

Without the luxury of stage props available to larger, financed productions, Set Designer Alonzo “Lonnie” Wilson was nevertheless able to add artistic touches supportive of the actors. Allowing for the need to keep the stage available to accommodate the dancers, Wilson uses two major set pieces, Sassy’s daintily feminine bed and dresser and screen shots of a window, lockers in a high school, the school playground, and ballet class with balance bars and a mirror screen shot to orient the scenes.

Stage Manager Sheila Salters-Anderson and her assistants Carol Dingle, Kamishia Francis, and Dora Muhammad and stage crew do an admirable job moving props into place despite being unexpectedly short staffed at curtain call. As is the case with small stages, getting props on and off the stage can be challenging. Though only seconds elapsed, it felt longer and this lengthened the time the audience was in the dark, waiting expectantly. I commend Sheila and her team’s seasoned response to unavoidable last minute changes.

Music Director  Angela Somers and his assistant Joseph Willett’s work sparkled and popped. I found every note superb, well-delivered by all the actors with singing parts. I do prefer a list of songs to be included in the Program. it would have helped me prepare for this review.

Running Time: One hour with one 15 minute intermission.

Dancing in the Wings‘ final performance is today at 3 PM. at The Hylton Performing Arts Center – 10960 George Mason Circle in Manassas, Virginia. Purchase your tickets at the box office. Map and directions.