In keeping with its blues-drenched hand-clapping theme, the Metropolitan Jazz Orchestra (MJO), delivered another festive evening of big band tunes at 8:00 p.m. on Saturday, March 30, 2013, at the Hylton Performing Arts Center in Manassas, Virginia. Under the accomplished direction of George Mason University’s Director, Jim Carroll, seventeen first-rate musicians entertained with a compilation of jazz and gospel worship music. This combination has been done before and as we know, gospel music has been widely credited with influencing blues and jazz music, but I wondered how MJO would interpret and intertwine such distinct styles of music. I listened with focused attention to MJO’s selection of songs and was pleasantly entertained. 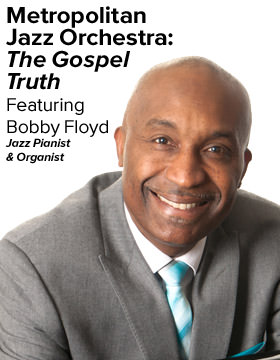 Guest musician, Bobby Floyd, displayed his keyboard artistry on both organ and piano and effortlessly fit like hand-in-glove into this big band orchestra with his very unique and inspirational style of playing. A veteran performer of jazz orchestra, symphony and chamber music, Bobby has appeared extensively throughout the U.S., Canada, Europe, and Japan. He immediately ignited the audience by toe tapping, bobbing and weaving his head and body sideward in musical ecstasy. Bobby played “The Work Song” accompanied by Harold Summey (drums) and Rick Whitehead (guitar). What awesome organ footwork! Other offerings included “Brother Griff McSmith” with wind instruments support featuring Luis Hernandez (saxophone) and his resounding twelve-minute rendition of a much-loved song, “Amazing Grace,” was immediately recognized and appreciated by the audience.

It is always a treat to hear Dr. Darden Purcell, special guest vocalist and sought-after jazz vocal educator from the University of Illinois at Urbana-Champaign. Dr. Purcell sang “Halleujah” and a bluesy rendition of “Moaning,” accompanied by Rick Whitehead (guitar). Following a brief intermission, Carroll and the MJO offered an original composition, “Groove Merchant” in honor of the venue—Hylton’s world-class Merchant Hall facility. Bobby returned to the stage with an offering of “Blues Two” supported by an excellent drum solo from Harold Summey. Rounding out the evening were three short renditions of “I’m in the Mood for Love;” “Come Sunday;” and interestingly, “Battle Hymn of the Republic” in which Bobby moved from organ to a piano presentation. Outstanding musicianship, to say the least.

I was very well satisfied with the overall musical performance of every musician and vocalist and would happily recommend anyone to see and hear them in future dates. The handbill, however, did not include the songs and composers, so it was a small diversion from my musical enjoyment to strain to hear the artist names and song titles. In my opinion, however, the choice of songs left me wondering if the gospel connection would have been stronger than the blues connection if more songs were actually religious songs with jazz or blues origins. The program quoted the Opening Address to the 1964 Berlin Jazz Festival, wherein Dr. Martin Luther King, Jr. said, “Jazz speaks for life. The Blues tell the story of life’s difficulties . . . they take the hardest realities of life and put them into music, only to come out with some new hope or sense of triumph. This is triumphant music.” Very well said.

An austere stage—a floor to ceiling linen-like texture painted canvas with lighting that began with deep purplish blues, transitioned to bright reddish oranges, and then curiously changed to solid black during Bobby’s riveting solo rendition of “Amazing Grace”—did not go unnoticed. Following intermission the lighting transitioned to purple and blue hues of a slightly lighter tone which I interpreted as “solemn, but hopeful.” I would have liked to see brighter lighting by the end of the performance—yellows, reds, and pinks, for example, signifying, at least for me, “rebirth, optimism, and grace.”