There were many wonderful Scene Stealers on DC Metro Area stages in our professional, community, children’s, and university theaters during the past theater season. The DCMetroTheaterArts staff will be offering their favorite Scene Stealers of the last DC Metro Area theater season (August 1, 2012 to August 1, 2013) in the next ten days, so here’s our first set of honorees:

Andrea Burkholder in She arrived, alone (Part One) of Daniel Burkholder/The Playground’s The Chemistry of Lime Trees.

Andrea Burkholder‘s organic and heart-wrenching performance in She arrived, alone (Part One) is still ingrained in my mind. There are two Scene Stealing moments that stand out to me the most vividly, five months after the fact, and they are as clear as day. At the top of the piece, she performed a labored walk across the length of the stage attached to a rope tied around her waist, showing the young Russian girl’s unwillingness to emigrate to the United States. With each step, we feel more and more for her character, and the unknown variables that await her in this new world with a husband she has never met. The other moment that took my breath away was when her husband, portrayed by her real life husband Daniel Burkholder, swept the seed from the periphery of the stage, encroaching on her space more and more with each rotation with his broom. Andrea’s movements become more confined and frenzied as the space covered in seed diminishes. Andrea’s varied performance qualities and the harrowing interior monologue conveyed adroitly through movement are two reasons these Scene Stealing moments stand out for me.

Tracy Lynn Olivera Singing ‘Ribbons Down My Back” in Hello, Dolly! at Ford’s Theatre.

Tracy Lynn Olivera played Irene Molloy in Ford Theatre’s production of Hello. Dolly!, and while she is a major character, her one big solo happens midway through Act One, when she sings the beautiful ballad “Ribbons Down My Back,” describing how she’d love to catch a gentleman’s eye and fall in love, even though she’s resigned herself to never falling truly in love again.Hello, Dolly! is such a fun, upbeat musical that this beautiful ballad really stands out in contrast to the bouncy numbers that surround it, and Tracy Lynn Olivera knocked it out of the park. She has a beautifully rich full voice that not only highlighted the beauty of the song, but Olivera’s fine acting really helped the audience understand who Irene Molloy was.

There’s really ‘no place like home,’ as the saying goes. The Scene Stealing performance of Awa Sal Secka’s Dorothy, in Montgomery College’s Summer Dinner Theatre production of The Wiz takes you to that “place where there’s love overflowing” in her soulful finale of this time-honored musical. The colorful fantasy of Dorothy’s unforgettable journey to Oz can’t replace home, where “we must look into our hearts.” Awa Sal Secka’s soaring vocals transported me there and beyond in her heartfelt rendition of the beautiful finale, “Home.” “Time be my friend, let me start again” is the sentiment you have after listening to Dorothy sing this tune just before she clicks her silver heels to go home. You wish time could stand still so Awa could have sung it again in an encore that just keeps rising….

Bradley Foster Smith as Mervyn in Act One of A Behanding in Spokane at The Keegan Theatre.

Bradley Foster Smith‘s performance as Mervyn made this hapless hotel clerk the most memorable character onstage—in a darkly comic Martin McDonagh play packed full of doozies. He arrives on the scene having left his post at the front desk to visit a guest’s room and check out some strange goings-on—a gunshot, to be exact. Flummoxed and unhinged by what he finds (this is a grisly McDonagh bizarre fest, after all), Mervyn tries to keep his professional cool, and fails hilariously. Mervyn monologue on paper has some of Behanding’s funniest writing, but as performed by Smith, it had me and my fellow audience members gasping for breath with laughter that hit a pause button on the whole show. His comic-timing genius brought cadences and inflections to the text that would have made the playwright cheer too. With all respect to the other fine actors in this production, McDonagh really ought to meet Smith forthwith and write for him some more. 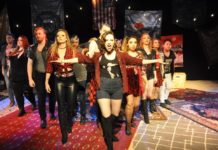 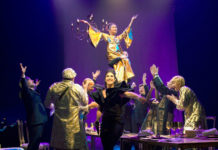