I must confess, when I was picked up as a reviewer here at DC MetroTheaterArts for this year’s Fringe I got in a little late to the game. Joel and Brett were already well underway scheduling reviewers , and most of the “must see” shows that I’d heard whispers about were already covered. The day after I was picked up, however, Joel received word from Fringe about their new Site Specific shows, none of which had yet been scheduled…and none of which I had heard anything about. That being said, I didn’t want to miss out on something special, again, so I quickly perused the descriptions and picked the one that seemed most intriguing. 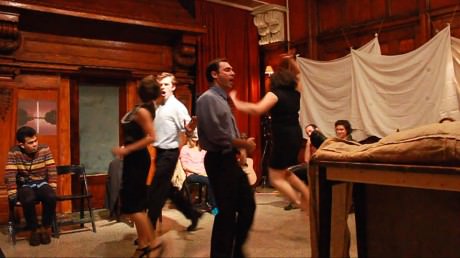 That description I picked was for Wistaria: “A transgressive anti-narrative that jumps through U.S. history following the transformations of the tent-revival Methodist hymn that became ‘John Brown’s Body’ and then ‘The Battle Hymn of the Republic.'”

If that doesn’t intrigue you, Wistaria is probably not the performance for you. If that does intrigue you – even in the slightest bit – go. It will be worth every second of your time.

Conceived of in New York City in 2012, The Wistaria Project is the brain child of Jeremy Goren, who performs in the piece along with Stephanie Eiss, Richard Sheinmel, Laura Bernas, and Alexandra Zajaczkowski.

It performs in “homes and odd spaces, searching alternative ways of living in art and society,” according to their postcard, and this time around it has come to DC’s Hillyer Art Space.

Tucked away in between Georgetown and Embassy Row, the Hillyer Art Space is “a program of International Arts & Artists, a non-profit organization dedicated to increasing cross-cultural understanding and exposure to the arts internationally.” When I arrived (early, as I usually do), I found three well-dressed Hillyer interns manning a booth outside the space where I expected to see fringe volunteers in their standard issue black and red tees. The very polite interns informed me, and all those who approached afterward, that we would soon be let into the gallery and that Jeremy would then come invite us all in together.

Soon, the audience grew and we were allowed to enter the “lobby,” of sorts (actually the entry foyer to the gallery, complete with curated art). Shortly afterward, a slight man in a black suit with an American flag pinned to his lapel pulled back two white sheets loosely covering a door and invited us into the next room. There, around 30 white chairs lined the periphery of another part of the well-lit gallery (once again, complete with curated, although this time sometimes covered, art.) We were all given Wistaria songbooks, and were told that some seats were reserved for the performers.

What followed is difficult to describe, at least empirically.
Think of Wistaria as a performance collage where movements, texts, song, dance, the audience, and other symbols are juxtaposed against one another in rapid and overlapping succession. If you refer back to the original description I read, you will recall something about “John Brown’s Body” and “The Battle Hymn of the Republic” – think of these Methodist hymns as a lens through which Wistaria looks at the larger collage of American history up through the immediate.

As the juxtapositions in Wistaria emerge, look for the ways in which the light cast by one moment creates a shadow behind another. Somewhere in this interplay of light and shadow, Wistaria points toward important questions and about American history, feminism, dick jokes, slavery, freedom, literature, fart noises, contemporary politics, deviled eggs, and much, much more.

Most importantly, though, Wistaria asks its audience to remain communally present and part of the performance (remember the songbooks? You will need them.) Wistaria invites you to actively take part in its own interpretation, individually and communally. In doing so, it asks you to contemplate the ways in which you actively take part in interpreting history and, by extension, the present moment.

Wistaria is a pointillist painting – from up close, it appears as simple, colorful dots. But the further back you get, the more those dots start to come together and form a larger, but equally colorful painting. Before you know it, you realize those dots were, in fact, the painting the whole time – the only thing that changed was your perspective.