Thank God for plucky women. While our society today continues to struggle with the question of gender equality, we sometimes forget to look back at the times when women were truly invisible. Hello Girls: Unknown Heroines of WWI is a reminder of just how far plucky women have gotten us and how many strides we truly have made. 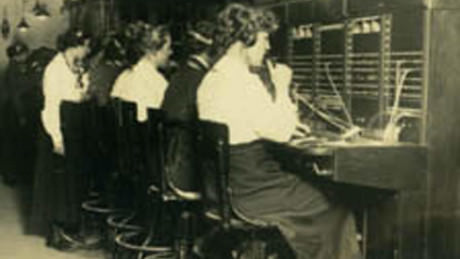 Researched, written, and performed by Ellouise Schoettler, the plight of these relatively unknown women is brought to light in an incredibly informative way. The Hello Girls were a group of female switchboard operators who aided the US military in establishing vital communication lines with the other Allied troops. After the war ended, they were denied veteran status until 1977 after 60 years of lobbying.

Ellouise Schoettler conveys three very beautiful stories in her one-woman piece. The first, Olive Shaw, was never thanked by the US Army for her services until she was 89 and living in a retirement home. The second, Grace Banker, was the Chief Operations Officer for the group and was awarded the Distinguished Service Medal. The last, Merle Egan Anderson, was a key figure in the race to obtain benefits for the women in service. Each of these women were made distinctive simply through the use of different pairs of glasses or in one case, a Western accent.

Schoettler, a veteran of Capital Fringe, is mostly successful in evoking pathos and becoming the voice of these women through her story telling. Her second piece, “Grace,” is captivating in its detail and description of valor, perseverance, and patience. However, the writing was not consistent throughout all three scenes and the first piece, “Olive,” sometimes came across as mechanical and stilted because of this. Thankfully, it was the shortest of the three and Schoettler still managed to bring out moments of poignancy throughout.

For a culture that is craving equality in all areas, stories like the ones told in Hello Girls are necessary for continuing growth to occur. The women of tomorrow are certainly meant to be influenced by the women of yesterday. Ellouise Schoettler gives voice not only to the Hello Girls, but to women across the ages.