The Insanity of Mary Girard is a play showing Mary Girard’s descent into insanity as she comes to term with her admittance to an insane asylum by her jealous and hateful husband. This version, directed by Natalie Villamonte Zito, was fully entertaining, creepy, and wonderful. 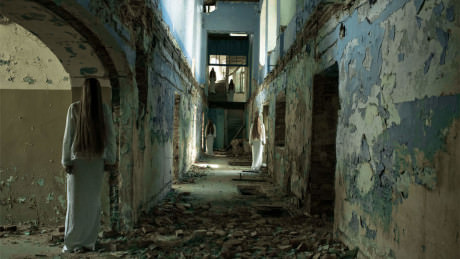 Zito’s artistic vision was best exemplified by the five Furies. Clad in black with harrowing black bird masks by Lia Boner, these furies, played by Vincent Joseph Donato, Nancy Ellen Reinstein, Lauren Smith, Russell Norris and Madeline Hickman moved across the stage with brilliantly scary elegance and precision. They spoke their sentences all together, taking turns with the words to piece together each phrase. The effect was five characters that seemed to act as one being, the monster within Mary Girard. In all that they did, they set a creepy tone to the production, whether it was by scolding, mocking or judging Mary. I do wish their piecing together of the sentences had gone a little smoother. A few times it was difficult to see when one sentence ended and another began – which was confusing.

Accompanying Mrs. Girard in the insane asylum were three inmates, played by Monica Lerch, Gareth Balai, and Camilla Skalski. The two women wore pathetic white gowns and had teezed their hair. They were also made extremely pale. With them, Zito had mastered that insane look. Balai was also dressed in white, though he donned a loose shirt and pants. All three of them had no lines but regularly screamed and shrieked with so much vigor that I wouldn’t be surprised if they were actually insane.

Mary’s husband, Philip Girard, is played by Timothy Bell. Bell was master of the unemotional, apathetic character he was portraying. When talking to his wife, Bell displayed the sort of non-caring pretentiousness required of a man who punishes his wife by putting her in an insane asylum. He showed one enraged moment of passion but other than that, Bell played his character with a consistent stolidity.

Each of the furies played other roles as well and each was great. In particular, Russel Norris who played Mr. Philips, the doctor, was great when he was trying to tell Mr. Girard that his wife might not actually be insane. He seemed timid and sheepish which was perfect for a mere hospital employee to be talking to—and disagreeing with – the richest man in Philedelphia.

Jak Prince was in charge of the excellent lighting and set design. The set included the fancy desk of Mr. Girard. Center stage was occupied by an ominous chair, used in treating the insane. Also there was a thin mattress on a bed frame with one tattered sheet and a lumpy pillow. It looked exactly as one would expect a psych ward to look in the early years of the United States. The backdrop of the set was just a light. It changed depending on Mary’s state which was a neat idea and worked pretty well.

Eliza Hill played Mary Girard and she was fantastic. Her amazing performance exemplified the fear, rage, insecurity, doubt, and final craziness of her character. Her voice caught a myriad of emotions and her acting was phenomenal.

The Insanity of Mary Girard was a great production. The furies brought the fear that Mary was experiencing to the audience. So come, see what it takes to be insane. See what it means to be powerless. I wouldn’t miss this one, folks!