Tributes and expressions of affection and appreciation for Joel have been pouring in. This is a space for us to celebrate and remember our friend, Joel Markowitz. Use the comments to share feelings, favorite stories, and photos. 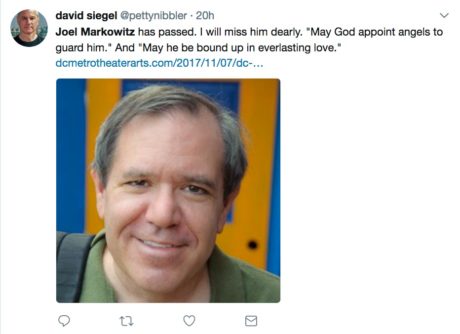 Joel was very special, and I’m forever grateful I knew him. Usher trips to NY. Tony-watching potluck parties. Laughing our way through absurd fringe shows. His sense of humor and passion for theater carried him through many trying times. And he carried me through the delights and discovery of DC theater with his enthusiasm and dedication to the arts. I will miss him. May he rest in peace.

I had many long and memorable conversations with Joel over the years about theatre in the DC area. He was a champion for small and aspiring companies, a square dealer, a thoughtful listener and a good man. Rest In Peace, my friend. You’ve earned it.

RIP Joel, sorry you had to leave us so early in your life, you will be missed by many in the world of live theater.

Joel Markowitz helped with MD Theatre Guide before leaving to begin his own publication, DC Theater Arts. We have many fond memories of Joel and are mourning the loss of this amazing advocate for the theatre community.

So sorry to hear about Joel’s passing. He was so beloved by the DC theater and performing arts community. Just wanted to share how important he has been to my life, although I never met him in-person.

My first memory of Joel is a fond one. I grew up in the area, very active in a theater group in Montgomery County. We had these annual carwash fundraisers that helped to provide for sets and costumes each year. One year, after I graduated out of the program, my brother (also in the program) told me he had met a man at this fundraiser who ran a DC theater blog, and they had such a good conversation, my brother began to write for him.

I was in my freshman year of college – the idea of writing on the performing arts hadn’t ever occurred to me, but I started writing for my college newspaper, and by my senior year was the Arts Editor. That position segued into an internship here at the Kennedy Center, which turned into the position I hold now.

So, in a sense, you could say that Joel kicked my whole career experience off. 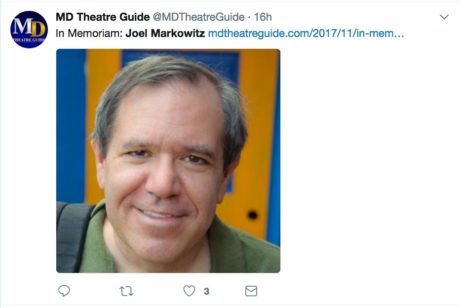 Dearest Joel, A very dear friend, an extremely optimistic and kind of soul. I will miss his graciousness, his lovely sense of humor, and his wonder at the joys of life. I am very saddened at this very, very dark news. I am so happy that he came to see MASTER CLASS at Metro Stage. We had such a very special chat, even though it was challenging for him to be there. I will always treasure our time together. His lovely sense of humor, his kindness. This world has lost a very special person. But he is at rest now, and free of physical and emotional constraints. He can now fly. Rest in peace my dear friend.

Bruce, I send my sincere condolences to you, your brothers and your families, on the passing of your delightful brother Joel. He meant much to me too, and was instrumental in making my later life infinitely more productive by his faith in me, his constant encouragement, and great support.  He will be missed by many, for his generous spirit touched so many. I will be with him in spirit for a long time to come. 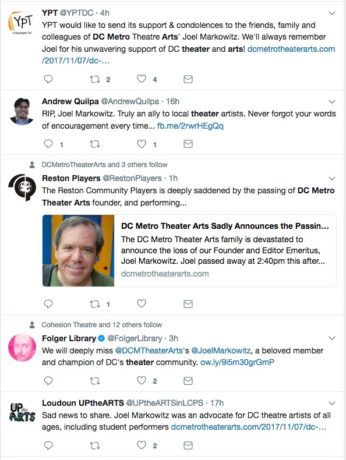 Back in December of 2013, Joel and Yvonne French came out to see our first production of A Christmas Carol. We weren’t a company just yet, and had produced the show under the Community Crisis Services Inc. banner. Both Joel and Yvonne were incredibly supportive, and Joel called me personally a few weeks later to tell me that our young actor, Sofia Nasreen Riazi Sekowski had received a ‘Best Of’ Honor for her portrayal of Tiny Tim.

During the conversation, Joel supported my ideas of a new company in Prince George’s County. He understood my vision, and my mission and encouraged me to pursue my dreams as he’d done with many others before me and WPTC was officially launched in July of 2014. Joel believed in the power of theatre, and worked tirelessly to support smaller companies regardless of their budgets.

I remember during one production we had absolutely no money for advertising and Joel called me asking where my ad was. When I explained the situation he insisted that I send copy to him anyway. He told me that if the show did well, I could pay for the ad at that point, and if not then I hadn’t lost anything.

It was just the kind of man he was.

Since that first meeting, Joel went out of his way to help WPTC in whatever way possible while insisting that we hold ourselves to the highest standard possible.

The theatre community will never be the same thanks to his unflagging optimism, passion and drive. Those of us he took under his wing will never forget his support, his encouragement or his belief in each of us.

The world is just a little dimmer today.

I found out about our loss of Joel yesterday. I will be directing “Tuesdays With Morrie” for Prince William Little Theatre.  The show will go up in March and I plan to dedicate it to Joel. This play had a personal meeting to me from someone lost years ago.  With our loss of Joel, it now means even more.

God Bless Joel and his family.

I have lost a loyal friend, and a guarding angel. Joel Markowitz has died and I am sad and my heart is broken.
Joel has found his greatest passion in music, theater and performing arts. With decades
of experience in theater arts, Joel established his beloved theater website- DCMetroTheaterArts.com.
He was the greatest advocate of discovering new talents, especially young upcoming new talents, and promoting the performing theater arts to a higher level. It was his love of music, theater, and music that brought our hearts together. Our paths have crossed and Joel was unforgettable and inspirational to my life.
Joel was caring and loving. He had high expectation and went above and beyond in every aspect of his life. Joel hold the torchlight every night and worked tirelessly until 4 AM in the morning. Whether he was working on new reviews that had just came in, or tried to schedule his staff’s month’s schedule and assignment, he used his limited strength in his arms and hands, Joel wanted to inject his energy as the profound fuel to continue his legacy for his family, loved ones, friends, colleagues, fellow staff members, and readers. He burned out his candle and sacrifice his health until the very end. I was heartbroken and felt powerless to ease his pain when I dressed him and getting him ready to face the challenge of the world and his battle with ALS.
Joel was a giant and admirable hero because he put himself out to the world with bravery, class, passion, respect, acceptance, tolerance, and encouragement. When he used his trembling hands and arms to write down review notes on his notebook, our eyes were locked and we shared tears together holding his trembling hands. When we worked on writing reviewers’ checks, Joel always put his staff first without paying himself. Joel and I have tremendous respect for his family, friends, colleagues. Isn’t this the very best of DC Theater Arts family?
I miss Joel every day. I still remember vividly how Joel sat in his blue chair before his passing and smiled at me. Joel’s last words to me were loving and caring. He said: “Take good care of yourself, David.” Joel brought happiness to everyone and greeted people with a class act and elegant style. Joel’s memories are everywhere. Joel is a special person with a beautiful soul. Our heavenly Father please take good care of our beloved family Joel and look after him. I love you, Joel. – David Chen