In The Lives Left Behind, the Silver Finch Arts Collective presents four short, one-act, chamber operas, each by a different composer and librettist. The instrumental music for all four pieces is written in a contemporary chamber style, provided by an excellent on-stage, four-piece ensemble (violin, viola, clarinet, piano), ably conducted by William Kenlon and Michael Oberhauser. The vocal scores are through-composed, rather than being structured in recitative/aria fashion. 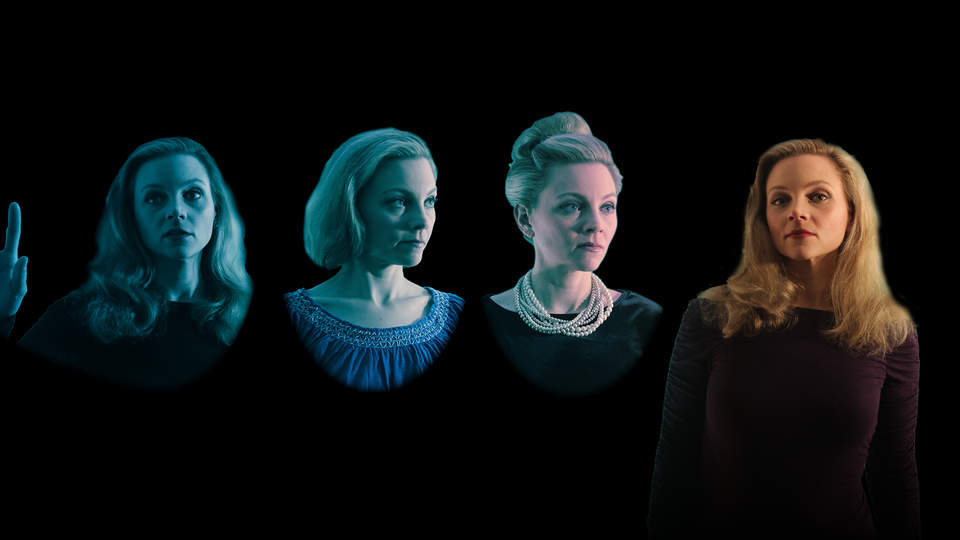 The Female Stranger (music and libretto by Joseph Kaz), set in 1816, begins with Andrew Clermont (mezzo Katherine Fili, in a pants role) lamenting being stuck in America because of his wife’s unspecified terminal illness. Fili, who was a late addition to the cast, not only sings fluidly but gets the male character’s physicality well.

Andrew’s wife, the Female Stranger of the title, is played by soprano Annie Gill, who has the closest thing to a traditional aria in the four operas, the touching “Is this truly my life now?” Andrew has, in somewhat cavalier fashion, moved on even before his wife’s death, taking up with the healthy and vivacious Veronica Gadsby (coloratura soprano Kelly Curtin), much to the moralistic dismay of Pastor Cleary (baritone Spencer Adamson), who also comforts Andrew’s wife with a heartfelt prayer.

There are probably not many operas focused around assisted suicide, but What Gets Kept (music by Frances Pollock, libretto by Vanessa Moody) addresses the subject with tenderness and sensitivity.  Amy (mezzo Elizabeth Mondragon) is terminally ill and has clearly expressed to her husband Lawrence (tenor Nigel Rowe) and daughter Emma (Curtin) her decision to die on her own terms at a time of her choosing. They have agreed to help her take the medication that will end her life, but with her and between themselves, they explore the complex emotions involved before and after Amy’s death. The quiet, sweet farewell the characters sing is one of the best moments of the evening.

Nor are there probably many operas featuring a sleep study. Dreamless (music by Kenlon, libretto by Katie Vagnino) gives us a young man, James (Rowe), who claims that he never dreams.  A medical researcher, the Professor (Mondragon) and her assistant Peter (Adamson), bring James in for a pair of sleep studies, which reveal that he does in fact dream; his dreams all concern a mysterious woman named Amelia (Gill). The study ends with the Professor unable to form any conclusions, but the writers then provide a surprise ending.

The Name on the Door (music by Michael Oberhauser, with a libretto he adapted from the King James Bible) begins with a seeming love duet between pop diva Jezebel (Gill) and her agent Eli (Adamson), the text deriving from the Song of Solomon. Alas Jezebel is, in Adamson’s estimation, getting too old (almost 40; the horror) to promote effectively to a youth-obsessed public, so he replaces her in his business and personal affections with the teenage, vivacious (that word again) Josephine (Curtin). But, like Margo Channing in All About Eve, Jezebel is not ready to quietly fade away. Both this opera and Dreamless contain a good bit of humor, in contrast to the more somber tone of the first two pieces.

The singing in this quartet of operas is first-rate throughout. Except for the youngest singer, Rowe, whose voice seems less mature than those of his colleagues, all the singers have had substantial professional success. In range, tone, technique, dynamics, and vocal characterization, they provide fully realized performances of their material. Though Adamson is a bit physically stiff at times, their acting – particularly that of Gill and Curtin – is also strong throughout.

While the program and Silver Finch website do not list a set designer, director Corinne Hayes uses the simple and flexible set to good advantage. It consists of a table with two chairs near the center, another row of chairs (used as a deathbed in the first two pieces), and, most notably, a clothesline with four sheets hanging on it across the back of the playing area.

At times (e.g., Amelia’s first appearance in Dreamless), a singer’s silhouette is projected onto the back of one of the sheets. One of the sheets is pulled down and used in each of the four operas (e.g., as a shroud for the wife in The Female Stranger). The set works well in the confined space available and also makes matters efficient by avoiding the necessity for set changes.

Running Time: One hour and 30 minutes.