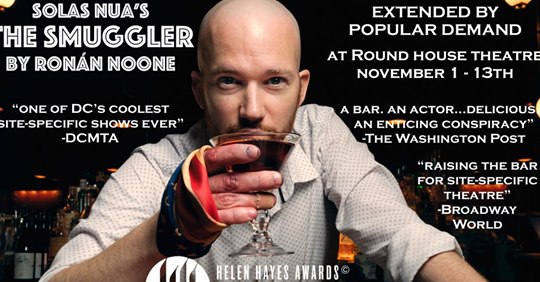 Audiences who missed their chance to catch the critically acclaimed show will have another opportunity to experience what critics hailed as, “one of DC’s coolest site-specific shows ever” (DC Metro Theatre Arts), “raising the bar for site-specific theatre going forward” (Broadway World).

Irish immigrant Tim Finnegan had notions of being a writer in America but struggles as a bartender on the island of Amity. That all changes when a stranger arrives with a plan to make people “disappear and reappear,” and Tim learns the price he must pay to become an American.

Solas Nua Theatre’s artistic director, Rex Daugherty, turns in a performance that The Washington Post described as, “delicious…an enticing conspiracy. Daugherty is so good as the bartender that you almost forget how evil he is.” Directed by Laley Lippard, sound design by Matthew M. Neilson, lighting design by Marianne Meadows.

During the play, the actor makes signature cocktails for the audience.

“Each drink he prepares offers him the chance to add a dramatic flourish to a particular scene… This mixology-as-storytelling device weaves the production’s dramatic threads into one hypnotic string of drink orders.” (DC Theatre Scene)