In The Sheen Center’s world-premiere Off-Broadway production of When It Happens to You, best-selling author Tawni O’Dell shares her personal story of the ongoing effects that the brutal rape of her daughter (five years ago) has had, and continues to have, on the victim and her immediate family. Co-conceived by O’Dell, who appears as herself in the staged memoir, and Lynne Taylor-Corbett, who also directs, is designed (at her therapist’s suggestion and with her daughter’s approval) to make sense out of what they’ve experienced and to help others deal with the trauma, should it happen to them.

While the subject is of monumental importance and the family should be commended for its bravery and resolve, the theatrical presentation of the writer’s intimate autobiographical journey, in its present form, feels more like a reading, a lecture, or a self-help therapy session than a fully realized play of a professional quality. O’Dell, in fact, opens her direct-address monologue by telling the audience that she’s a writer, not an actress, and the awkward stilted delivery of her first-person account, along with a writing style that sounds more literary than dramatic, suggest that it might have been better suited to the format of an essay or a book.

The real-life family’s feelings, reactions, and behaviors, observed and described by O’Dell, make for a significant study in the psychology of trauma, but the performances by her and the supporting cast (Kelly Swint as her daughter Tirzah, Connor Lawrence as her son Connor, and Ryan George in multiple minor roles, filling in for E. Clayton Cornelious at the performance I attended) – which punctuate her recollections with recreations of conversations and events – lack emotional credibility and believable chemistry, in uneven portrayals ranging from monotone to histrionic. Unfortunately, Taylor-Corbett’s direction does nothing to create a consistent tone or fluid presentation, instead emphasizing the disparities of the acting and the disjointedness of the narrative with too many distracting scene shifts, blackouts (lighting by Daisy Long), and sudden juxtapositions of action with the central recitation.

A simple design, with a backdrop of staggered vertical panels and minimal furnishings of movable tables and chairs (scenic design by Rob Bissinger and Anita LaScala) and familiar everyday clothing and uniforms (costumes by David C. Woolard), offers little visual excitement. What is most memorable and impactful about the show are the staggering statistics of the rape epidemic in our country, which affects more women than heart disease and breast cancer combined: one in four women is a victim of sexual assault in the US, many of which go unreported, and many survivors of which blame themselves for the “most powerful,” “worst,” and “most significant” thing that will ever happen to them in their lives. That is a devastating message that should be delivered more effectively, with focus and force.

The theme of When It Happens to You is paramount, but its significance is undermined by a production at The Sheen Center that is unpolished and unsatisfying. It is a story that needs to be told, but preferably in a genre at which the author excels. 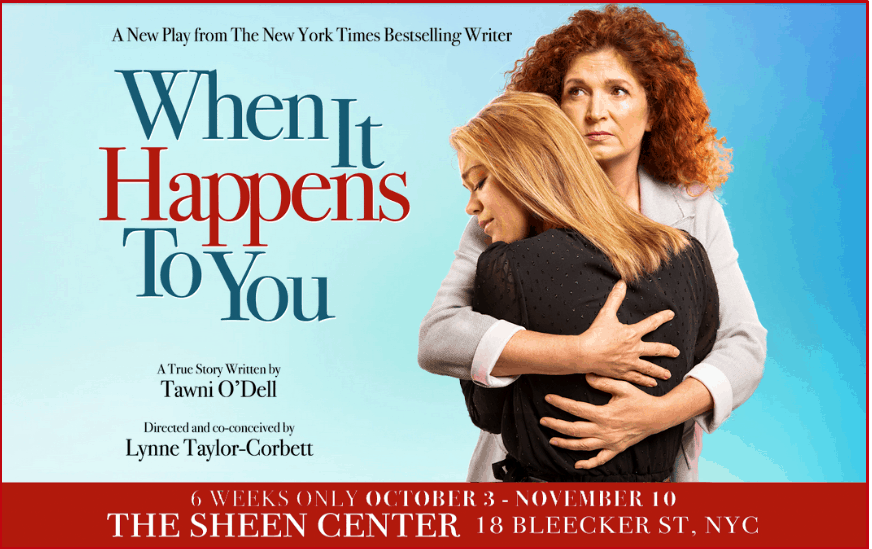