In December 2012, at the age of 95, Margot Wölk revealed a secret she had kept hidden for seven decades: her involuntary role in WWII as one of fifteen young Aryan women conscripted to serve as Adolf Hitler’s food tasters (and the only one to survive the war; the others were shot by Russian troops). Then in her mid-20s, she spent two and a half years at the Nazi Führer’s heavily guarded East Prussian command center at Wolf’s Lair, sampling three meals a day before they were served to him to ensure they weren’t poisoned. That little-known historical fact provided the basis for Michelle Kholos Brooks’ fictionalized dark comedy H*tler’s Tasters, which premiered in 2018, and is now back in NYC for a limited Off-Broadway engagement at Theatre Row, presented by New Light Theater Project.

The show comes with a written warning in the program about its sensitive subject, controversial content, and triggering title, as the playwright (and daughter-in-law of legendary EGOT winner Mel Brooks, who wrote the song “Springtime for Hitler” in his smash hit comedy The Producers) chose to employ mocking gallows humor to ridicule the inconceivable madness and evil of the Third Reich. Along with the derisive laughter come scenes – all set in the same dismal grey room with just a table and three chairs (scenic design by An-lin Dauber) – of the women’s profound terror, and abstract segments of conceptualized movement (choreography by Ashlee Wasmund, with dramatic lighting by Christina Tang and sound by Carsen Joen) that bespeak their rote acceptance of the horror – or “honor” – of being chosen to serve, and possibly to die, for their leader.

Directed by Sarah Norris, an excellent all-female cast of four delivers an energetic, expressive, and youthful pan-temporal take on the characters, whose appearances and behavior seem younger than the real-life women (all in their 20s) who inspired them. Though costumed in period-style dress and braided hairdos (costume design by Ashleigh Poteat) and squealing over their favorite American movie stars of the era, they also shoot selfies with their cell phones and joyfully dance to post-modern pop music, as they fight, bond, and navigate issues of friendship, sexuality, and patriotism, and speak in the slang and inflections that recall the parodic teenage types of Mean Girls.

They are well portrayed by MaryKathryn Kopp as Hilda, the insulting and domineering daughter of a high-ranking military man; Kaitlin Paige Longoria as Anna, a sweet and sensitive girl with close Jewish friends, who is badgered and threatened by Hilda; Hallie Griffin as Liesel, the peacemaker who tries her best to maintain harmony among them; and Hannah Mae Sturges as Margot (named for Wölk), who cluelessly jokes about being poisoned until she comes to the realization that it could happen and it wouldn’t be funny.

The glaring anachronisms in H*tler’s Tasters are intended to make the girls relatable to a current audience, who could recognize in them their own vulnerable daughters, sisters, or friends, subjected to unchecked power, control, and widespread misogyny, in which women (and all “others”) are considered expendable and have no control over their own lives or bodies (I write this on a day when Roe v Wade is in imminent danger of being overturned by the US Supreme Court). Brooks’ message is clear: learn from history and don’t stand idly by; when you see something, do something – before it’s too late and they come for you.

For those who would like to delve further into the resonant themes of the show, New Light Theater Project is hosting a curated post-show Talk-Back Series, with special guests and moderators joining the creative team to explore such topics as the dangers of disinformation, the marginalization of minorities, and the significance of an entirely female-led theatrical production. 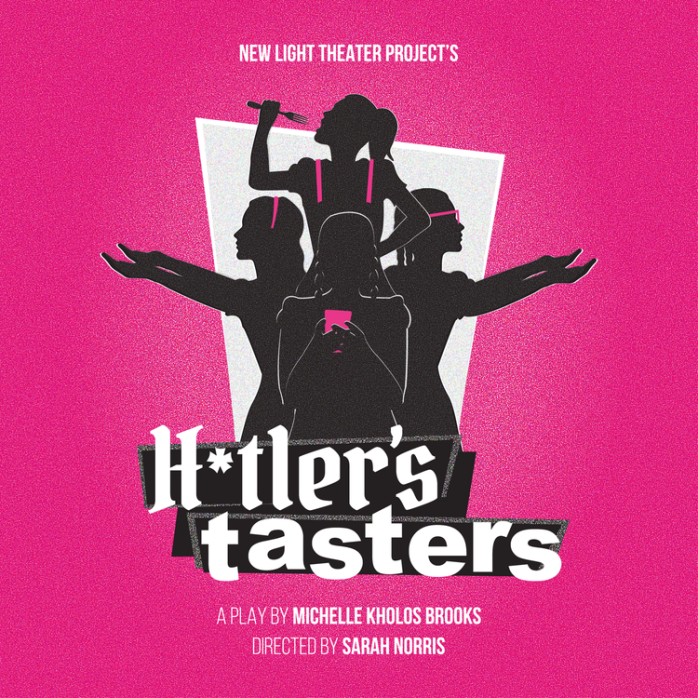 H*tler’s Tasters plays through Saturday, May 21, 2022, at Theatre Row, 410 West 42nd Street, Theatre One, NYC. For tickets (priced at $45-55, plus a $2.50 restoration fee), go online. Everyone must show proof of COVID-19 vaccination to enter the building and must wear a mask at all times when inside.