Close friends and fellow ecological researchers Sanam Shah and Ariel Spiegel have spent the past seven years investigating the cause of the worldwide decimation of the bee population, which they believe to be the result of a toxic pesticide produced by a major agro-chemical company, when Sanam, a PhD candidate in applied mathematics, discovers what might be a miscalculation in her data. It couldn’t have come at a worse time. Professor Philip Hayes, who is supervising the project, is about to receive a prestigious award and to present their career-defining paper – which has already been accepted for publication by an esteemed journal – at a professional conference in just a few days. Will they proceed with the presentation to advance their careers, or will they acknowledge the problem, accept the ramifications, and spend another three years researching the issue – which could be too late to save the rapidly disappearing bees?

Written by Madhuri Shekar, Queen – the inaugural production of the NAATCO (National Asian American Theatre Company) National Partnership Project with anchor partner Long Wharf Theatre in New Haven, CT, where it played in May – is now Off-Broadway for a limited engagement at A.R.T./New York Theatres. It’s an extremely intelligent work that combines discussions of such significant academic subjects as the Colony Collapse Disorder of honeybees, Bayes’ Law of statistical probability, and linear regression analysis with the personal backgrounds, inter-relationships, and motivations of the characters, which explain their conflicting perspectives and choices.

Aneesha Kudtarkar directs the compelling four-hander, delivered by an excellent cast starring Avanthika Srinivasan in an impressive Off-Broadway debut as Sanam, a brilliant young mathematician from a wealthy Indian family (that keeps arranging dates for her so she can find the suitable husband she doesn’t really want), and Stephanie Janssen as Ariel, a struggling single mother and beekeeper devoted to saving the species from extinction. The former’s steadfast adherence to proper procedures and accurate reporting of the numbers, and the latter’s dedication to the bees and career advancement so she can provide for her two-year-old daughter and herself, result in increasingly heated arguments that threaten their collaboration and camaraderie. The contrasting personalities (Sanam is more controlled, Ariel is more emotional) and development of the characters are well embodied by both, as their respect and support for one another shift to insults and animosity. Will they find a mutually beneficial solution, or will one become “the queen bee” in the competitive realm of academia?

The lead women are supported by Ben Livingston as Dr. Hayes, a cut-throat scholar who belittles his colleagues from other institutions, plays favorites with his two students, and is all too willing to have them manipulate the results of their study to his own advantage. And Keshav Moodliar, as Sanam’s arranged blind date and Wall Street financier Arvind Patel, adds humor to the show with his analysis of how to win at poker and his determination to marry her, move her to New York, and support her, after they just met, contrary to Sanam’s intent to be a self-supporting professional woman (Srinivasan’s reactions to it all are equally funny). He also adds another serious economic/political note in his recognition of their inherent bias against the corporate giant and pesticide producer, whose stocks he trades, with which the women approached their research, suggesting that the study was flawed from the outset.

A minimal artistic design efficiently enhances the theme without distracting from the words and message of the show. Junghyun Georgia Lee’s simple set of a movable table (with the audience seated on three sides of the theater) and overhead lighting by Yuki Nakase Link both take the hexagonal shape of a honeycomb. Sound effects and original music by UptownWorks (Daniela Hart, Bailey Trierweiler, and Noel Nichols) include the subtle buzzing of bees, and costumes by Phuong Nguyen are indicative of the socio-economic status of the different figures.

Queen presents an intriguing debate on a timely subject with resonant political, ecological, and ethical overtones, in a production that’s both thought-provoking and entertaining.

Running Time: Approximately one hour and 45 minutes, without intermission. 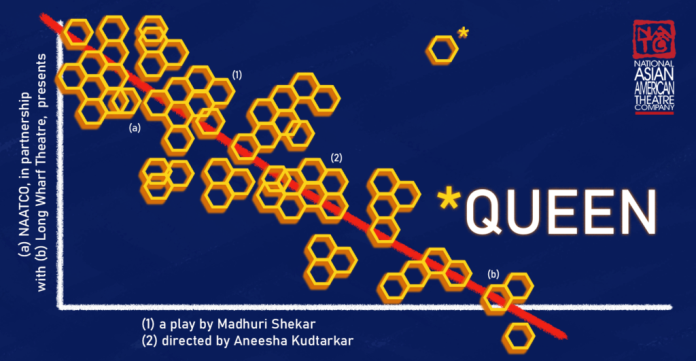 Queen plays through Friday, July 1, 2022, at NAATCO, performing at A.R.T./New York Mezzanine Theatre, 502 West 53rd Street, NYC. For tickets (priced at $35), go online. Everyone must show proof of COVID-19 vaccination and a photo ID to enter the building and must wear a mask at all times when inside.