Relationships between two queer Christians can often be tender but strained because of differing experiences within the Christian church. It’s an experience I’ve felt firsthand. While attending an Episcopalian high school in Alexandria, Virginia, I often felt close to but also jealous of a lesbian priest who taught religion classes to me. She had an ardent, healthy relationship to her faith that seemed miles away from Catholic upbringing, which taught me to bury my queerness. Growing up, I’d often wonder how could Christianity bring this lesbian priest so much joy, but bring my gay self so much pain.

A similar relationship between two queer Christians is staged in Benjamin Benne’s play In His Hands, now having its world premiere at DC’s Mosaic Theater Company. The show follows the relationship between Daniel (Michael J. Mainwaring), a tech company secretary with aspirations to become a Lutheran pastor, and Chris (Josh Adams), a coder who’s trying to shake off invasive memories of his father (Joe Mallon) and ex-gay conversion therapist (Sasha Olinick). Daniel and Chris soon start falling for each other, but their budding romance is tested by their different experiences and opinions about faith.

When I spoke to Benne over the phone, he was in DC overseeing tech rehearsals of the Mosaic Theater production. Benne told me he wrote In His Hands primarily to explore how multiple identities can coexist peacefully.

“I think a big part of the play was about these questions of belonging to religious community and a queer community, and how those two things are often put in opposition to one another, and wanting to find some sense of intersection between them,” he said. “Even more so, I was really hoping to find a sense of harmony between those two identities.”

The two protagonists of In His Hands, Daniel and Chris, represent two different struggles to find harmony between queerness and Christianity. Although Daniel feels very comfortable in his faith, others within his church may not fully accept him despite saying so. Benne interviewed an openly gay Lutheran pastor while writing the play, and wanted to share his perspective in the show.

“What I learned is that there is still some friction [in the Lutheran church], and there is some growth that needs to happen on the part of the institution,” he said. “And also, I think [there needs to be] some challenging of the individuals who belong to the institutions and wipe away unique facets of peoples’ identities in order to fit within the organization.”

Chris’s journey is markedly different from Daniel’s, since Chris never had a comfortable relationship to his faith. In the character of Chris, Benne hopes that he has written a character that is reparative for queer people raised in hostile Christian environments. Although he no longer attends the church he was raised in, Benne still identifies as Christian, and hopes to one day find a church where he feels like he can belong.

“It’s something that I haven’t given up hope in, that one day I may find a religious community that will allow me to embrace all of my identities in a way that feels holistic and genuine and healing,” he said. “I think that’s the hope that Chris lands at at the end of the play — that even if that hope of belonging to a religious community isn’t necessarily a promise, there is a hope that he can regain some relationship to God and that can be something unique for him, that it doesn’t need to be defined by who someone else has told him that God is.”

While In His Hands deals with many intense themes, it’s often a hilarious show that unfolds like a sweet rom-com between Chris and Daniel. Benne emphasized the importance of humor as a method for speaking to difficult issues, especially with In His Hands.

“I think I was inspired early on as a writer that, in order to maximize potential in terms of an audience’s engagement with something that can be really difficult, balancing it with humor would be a really effective way,” he said. “That feels really true to life, that there is always levity in the pain and hurt that people experience.”

Benne also said that a sense of fun is key among Mosaic Theater’s cast and production team, in order to make In His Hands truly come alive.

“There’s been a lot of levity and playfulness in the room, and a lot enjoyment of each other as not just people and fellow art weirdos, but also I think as collaborators,” Benne said. “We’re also just enjoying learning each others’ languages as art makers. I hope that is something that is apparent from watching this play, that there was a lot of play that went into the making of the play.”

Over the course of our talk, Benne cited many influences that inspired the show. Films that had an impact on his storytelling include Pretty Woman, Eternal Sunshine of the Spotless Mind, and Moonlight: all films that may loosely fit into the romance genre but still are expansive in terms of identities and formal inventiveness.

Benne also developed In His Hands while a student at Yale’s MFA playwriting program, and playwright-professors Jackie Sibblies Drury and Tarell Alvin McCraney helped push the play’s structure and emotional heart. It was at Yale that Benne wrote In His Hands’ most inventive playwriting choice: the use of repeated lists, refrains, and physical gestures.

“I realized that in a piece of drama, so much of what I’m interested in is exploring bodies in real time and space, and how important touch is in that sphere,” Benne stated. “That’s when I decided to make it a really formal vocabulary in the play and really get specific about when are characters touching, and how are the moments of touch echoing each other throughout the storytelling, and how a similar gesture of touch can actually communicate something very different depending on the context of who was touching whom.”

Benne hopes that all the elements of the play — from the exploration of two queer Christian men, to the humor, to the vocabulary of touch in the show — contribute to a sense of confidence and self-worth for audiences watching the show.

“I think at the end of the day, the plays that I write are really about love, as cheesy as that might sound to some people,” he said. “I really do believe in, ‘What does it mean to try to do your best by someone else, to really extend oneself in service of another and in service of one’s own self?’ Say that, ‘I am valuable, I am expansive, I contain multitudes, and there’s a lot within me and a lot I can offer others, too.’”

At least personally, watching In His Hands has made me think about my own experiences within Christianity not with contempt or pain, but with love. I’m now thinking back upon my time with my high school’s lesbian priest more generously, and feeling more grateful to have known and learned from her. I may not be ready to join the Catholic church once again, but In His Hands has made me find a smaller sense of harmony within this chaotic world. And for that, I am grateful, too. 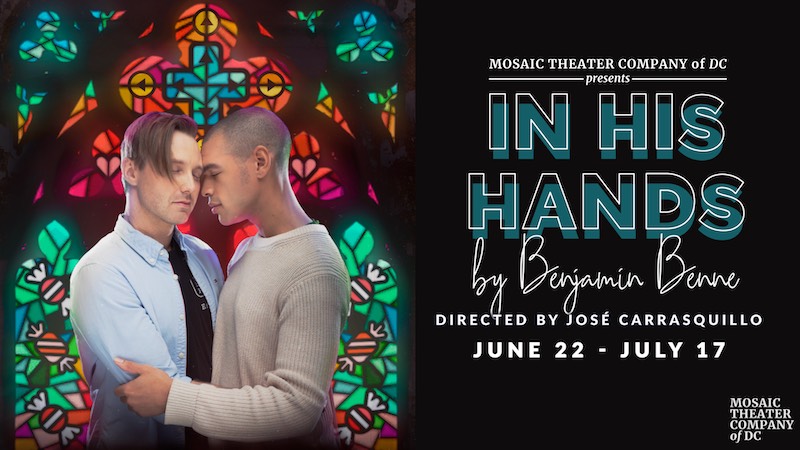 The In His Hands program is online here.

COVID Safety: All patrons, visitors, and staff who visit the Atlas Performing Arts Center are required to provide proof of vaccination to be admitted into the venue. Face masks that cover the nose and mouth are required to be worn at all times regardless of vaccination status while inside the building. See Mosaic Theater Company’s complete COVID Safety policies and procedures.

In His Hands
Written by Benjamin Benne
Directed by José Carrasquillo

SEE ALSO:
‘In His Hands’ at Mosaic asks if it’s OK with God to be gay (review by John Stoltenberg)