In military parlance, there are four domains of battle: land, air, sea, and space. But as technology plays a more prominent role in our lives, adversaries no longer need to meet on a physical battlefield to inflict harm. Weaknesses in cyber security make it possible for someone at a keyboard thousands of miles away to tap into computers and wreak havoc with the push of a button. This is what military experts refer to as The Fifth Domain.

Cyber security, and the responsibility of governments and corporations to safeguard public utilities, is the topic of Victor Lesniewski’s play The Fifth Domain, now enjoying its world premiere at the Contemporary American Theater Festival.

The play opens with a news clip announcing that the West Coast of the United States is experiencing an unprecedented and complete blackout. No electricity. No communications. No (brace yourself) cell phones. If you are part of the increasing global majority who rely on your phone as you do the air you breathe, this is enough to send a chill down your spine.

Lesniewski’s script, centered on the character of Troy (Dylan Kammerer), a National Security Agency (NSA) employee with strong opinions about government responsibility, does a stellar job of shaping the potentially dry topic of cyber security into a spine-tingling thriller with twists and turns that leave you wondering “whodunit” until the last minute.

The Fifth Domain is framed around a lecture Troy is giving on the topic of cyber security. Troy has been demoted from a highly classified job at the NSA, but we aren’t sure why. He maintains a relationship with his ex-girlfriend Lena (Kathryn Tkel), who continues to work in the upper echelons of the NSA. When Troy takes on a side gig exploring weaknesses in computer programs for a mysterious stranger who claims to have government ties, Lena is dubious. Something doesn’t seem right about the job.

Figuring out what the job entails, and who Troy is working for, makes up the scintillating heart of the show. The result is a play that feels like an episode of HBO’s Homeland, where secrets reign, the few in power make decisions that impact the lives of millions, and hackers infiltrate corporations and shut down the utilities we rely on for our everyday lives.

Lesniewski has a professional background in the intellectual property world, and that background comes through in the script, making sometimes dense material accessible. Troy is one of the nation’s top “pen testers,” for example, a term that refers to attempts to penetrate software by exposing security weaknesses before your enemy can find and exploit them.

The Fifth Domain explores these tensions through conversations between Troy and Lena and to a lesser degree between Naveed, the mysterious stranger, and Mei Li, a professional hacker who is brought in to work on the project with Troy. Kareem Fahmy directs the show at a brisk clip.

In the lead roles of Troy and Lena, Kammerer and Tkel create taut, immensely watchable characters. While a few of their personal conversations drag the action away from the central drama, the bulk of their interactions are a pleasure to watch due to the top-notch acting and clever dialogue. Tkel’s Lena embodies the essence of a smooth professional torn between her love for her job and her feelings for Troy. Kammerer’s Troy vacillates between a cocky, self-assured code breaker and a conscience-driven man riddled with anxiety.

The drama is supported by a pulsating electric score (sound design by Mark Van Hare) and a fluid set that allows the action to shift seamlessly from Lena’s apartment to a secret office in Virginia to a DC park bench (set design by David M. Barber). Projections are employed throughout the production (Max Wallace) creating floor-to-ceiling news broadcasts that escalate the show’s drama.

I left The Fifth Domain with a greater understanding of the ethical dilemmas that surround issues of cyber security. But I heartily recommend the show not because it’s a worthwhile civics lesson but because it threads this moral exploration into a dramatically fun and exciting ride. Contemporary American Theater Festival Founder Ed Herendeen calls The Fifth Domain a “cyber noir,” and it’s a fitting description. The show is a mystery designed to thrill. 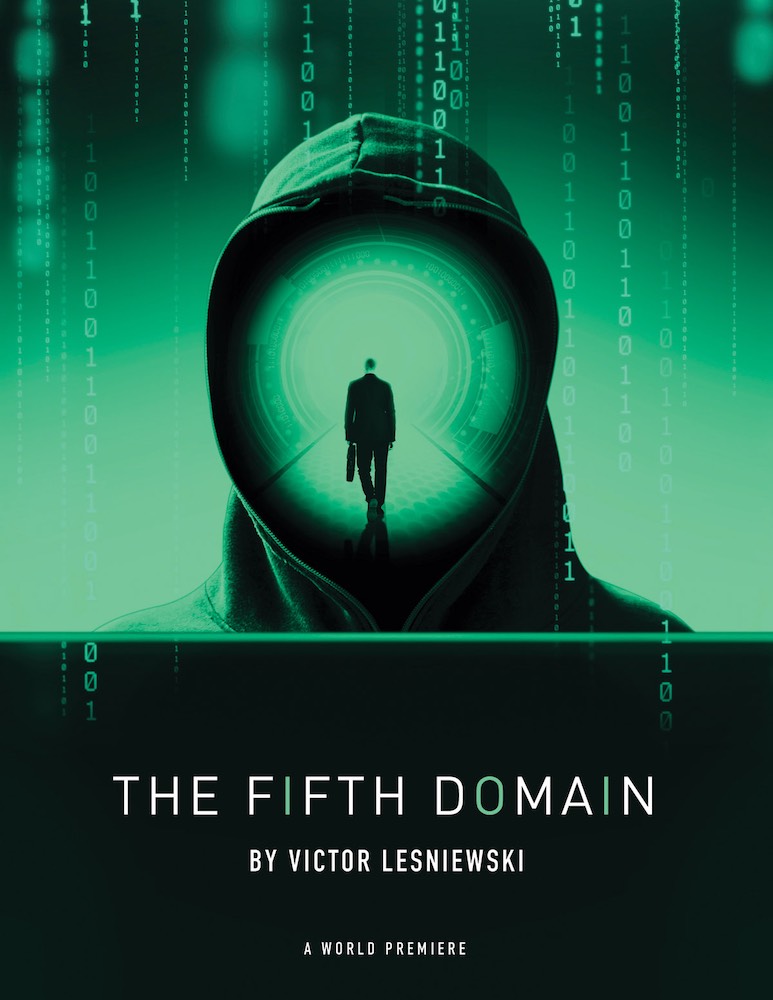 The Fifth Domain is playing in repertory at the Contemporary American Theater Festival through July 31, 2022, at The Frank Center, 260 University Drive, at Shepherd University, Shepherdstown, WV. The performance schedule is online here. Tickets ($68 regular, $58 senior, or $38 for Sunday evening performances) are available online.