I cannot recall a theater experience that had a greater lock on the conscience of its audience than the performance of The Box I saw Sunday at Anacostia Playhouse. A powerfully immersive two-act drama about punitive solitary confinement, The Box enacted episodes in the life of incarcerated people being kept isolated 23 hours a day inside cages for years. So gripping was this exhibition of institutionalized sadism that at intermission the spectators sat stunned in stony silence. Only at the end did they rise to their feet in rousing applause, as if released.

The production, written and directed by Sarah Shourd, herself a survivor of solitary confinement, had come to DC for two performances on a cross-country End of Isolation Tour — its itinerary ten specific sites where, state by state, laws limiting solitary confinement are being considered. (In DC there’s a bill before the City Council called the Eliminating Restrictive and Segregated Enclosures [ERASE] Solitary Confinement Act of 2022, currently in committee). The Box was thus, in the organizers’ words, an act of “legislative art.”

But principled as I knew the show’s purpose to be, I went wondering whether the performance would work as good theater. Answer: Absolutely. And not just good but outstanding. How else to account for the visceral captivation of witnessing up close a cast of actors (many themselves former incarerated people) who brought to their roles what seemed an embodied sense memory of inhumane incarceration and coldhearted loneliness?

The play began in darkness, with a cacophony of prison sounds — shouts, metallic slams, banging, cavernous reverb. Lights up on six platforms, each a foot high. Four of them would simulate the 6-by-9-foot single-cell lockdown known as “the hole” or “the box.” Two guards paced and patrolled the place.

“Welcome to the Cedar-Coast Correctional Facility,” announced the brusquely officious Officer Jones (Terrance Smith), who reminded us, “You are guests.” (The prison name is fictional but the reality it’s based on is all too real — Shourd spent years researching the authenticity of The Box, drawing on correspondence with incarcerated people.) And so the experience of immersion began to take hold — never to let go.

Four actors in assorted prison garb took their separate place on a platform and over the course of the play acted out vivid vignettes of their lives in semi-cinematic crosscutting lit only by the cold white fluorescent tubes that ringed each box. They have been issued neon-orange Croc-like footwear, shoelaceless and unweaponizable. This is, as one incarcerated person says, “a prison within a prison.” They have been “sentenced twice,” says another, once by a judge, a second time at the whim of a warden.

In Shourd’s terse and trenchant telling, we get to know a lot about the incarcerated characters. They become not genericized, otherized. Their individuated narrative arcs unfold in increments that connect our caring.

Jake (John Neblett), stocky and white, is fond of reading. He keeps a paperback dictionary and learns one word a day. He misses a man he loved. He also, we learn, has white supremacist tats.

Ray (Anthony Michael Jefferson), burly and Black, has been in solitary for 20 years, from when he was 39. He has a tiny black-and-white TV and watches soaps. “TV is my friend,” he says. His time is almost up.

Victor (Gabriel Montoya), lean and Latino, conveys with wiry physicality the anxious fury of “losing my mind from the isolation.” He has a daughter, Olivia (Jordan Maria Don), and though she is estranged she sometimes writes, calls, and visits in scenes of poignant pain. Victor keeps a paperback of In the Belly of the Beast: Letters From Prison by Jack Henry Abbott. At one point he sends her one of Abbott’s poems as his own.

Rocky (Troy Rockett), young and Black, is an angry newbie inductee. His lethal aggression against the guards is quashed by their brute force. In time he will take his rage against the system out on himself.

A second guard, a grim and tough Officer Miller, is played by the playwright and director herself. Be advised that characters in The Box spew racist, homophobic, and misogynist insults in quantities credible to the setting but nevertheless upsetting. What’s dumbfounding is how much verbal abuse and violence Shourd has scripted that targets the role she plays.

The entire production makes disturbingly palpable how inhumane are the conditions and how everything is out of incarcerated people’s control. Their only hope of redress, it turns out, lies in a spontaneous cross-racial hunger strike initiated by Victor (based loosely on a 2013 prisoner hunger strike in California).

The intermittent ambient prison sounds are chilling, and here are breathtaking instances of theatricality. A phone call between Victor and Olivia, for instance — strictly limited to two minutes but annoyingly interrupted by a voice saying how much time is left — is heartstopping. When Rocky commits suicide, as often happens in solitary, his hanging is evoked graphically solely by the actor’s body in silence. Then later the character returns and reads a heartbreaking letter to the incarcerated person he left behind.

In this communal theater space transformed to tell a story about solitary, it is actually we the audience who are transformed. We the visitors and interlopers here become complicit spectators to a staged synecdoche of America’s shame.

Running Time: Approximately one hour 40 minutes including one 10-minute intermission (followed by a participatory engagement circle lasting about 30 minutes). 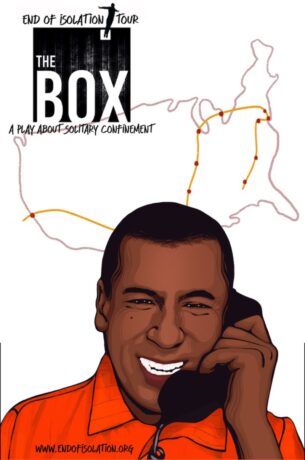