Spooky Action Theater kicks off its 2022/23 season with Jordan Harrison’s clever examination of a radical alternate lifestyle in Maple and Vine, directed by Stevie Zimmerman. Performances begin September 29 and 30 with Pay-What-You-Can previews and run through October 23, 2022.

Big City dwellers Katha and Ryu have become disenchanted with their 21st-century lives. The harder they try to figure out what happiness looks like, the more elusive it becomes. Then they meet Dean, from an idealistic community that exists in a permanent state of 1955. They forsake cell phones and sushi for cigarettes and Chicken à la King, taking on new identities that challenge who they thought they were and who they might become. How far will they go — how far would you go to alter your life in the pursuit of happiness?

“What has emerged as we have dug into the play is how relevant it seems 10 years after the original production, which would have certainly resonated in its own way,” stated director Stevie Zimmerman. “And indeed, post-pandemic the idea of voluntarily locking yourself away in an isolated community and disconnecting from the ‘real’ world is even more pertinent and intriguing. At its core though, I believe the play is about asking what the sacrifices are that we are prepared to make to find, if not happiness, then contentment. In this case, a man of Japanese heritage chooses to put himself somewhere where he will experience more prejudice and discrimination than he does where he lives in contemporary New York, in order to fulfill his and his wife’s dream of a child and a simpler life. It’s fascinating to consider what material comforts and aspects of our innate selves we’d abandon to reach for an elusive sense of fulfillment or satisfaction.”

Jordan Harrison was a 2015 Pulitzer Prize finalist for Marjorie Prime which had its New York premiere at Playwrights Horizons and was made into a feature film that premiered at the 2017 Sundance Film Festival. For three seasons he was a writer and producer for the Netflix original series Orange Is the New Black. Maple and Vine premiered in the 2011 Humana Festival at Actors Theatre of Louisville and went on to productions at American Conservatory Theatre and Playwrights Horizons, among others. Harrison’s other plays include The Amateurs, Log Cabin, The Grown-Up, Doris to Darlene, Amazons and their Men, Act a Lady, Finn in the Underworld, Futura, Kid-Simple, Standing on Ceremony, The Museum Play, and a musical, Suprema. Harrison is the recipient of a Guggenheim Fellowship, a Hodder Fellowship, the Kesselring Prize, the Roe Green Award from Cleveland Playhouse, the Heideman Award, a Theater Masters Innovative Playwright Award, the Loewe Award for Musical Theater, Jerome and McKnight Fellowships, an NYSCA grant, and an NEA/TCG Residency with The Empty Space Theater. His children’s musical, The Flea and the Professor, won the Barrymore Award for Best Production after premiering at the Arden Theatre. A graduate of Stanford University and the Brown MFA program, Harrison is an alumnus of New Dramatists. He is an Affiliated Artist with Clubbed Thumb, The Civilians, and The Playwrights’ Center.

Maple and Vine plays from September 29 to October 23, 2022, on Thursday, Friday, and Saturday at 8 pm and on Sunday at 3 pm presented by Spooky Action Theater performing at at The Universalist National Memorial Church, 1810 16th Street NW, Washington, DC. Tickets for two Pay-What-You-Can performances on September 29 and 30 can be reserved for $10 each; remaining seats can be purchased for any cash price at the door beginning one hour prior to curtain. All tickets for the remainder of the run are General Admission ($30 Thursdays and Sundays; $40 Fridays and Saturdays; $20 students with ID; $5 discount for seniors 65+) and can be purchased online.

COVID Safety: Masks must be worn by all audience members inside the theater except while eating or drinking in designated locations. The use of N95 masks is encouraged. 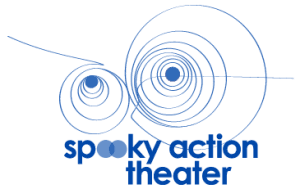 Spooky Action Theater is an award-winning, small professional theater located near DC’s DuPont, U Street Corridor and Logan Circle neighborhoods. Founded in 2004, the company takes its name from a quantum mechanics phenomenon “spooky action at a distance” in which two particles become entangled such that a change in one is instantly mirrored by a change in the other, no matter the distance between them. Our theater produces work that creates this kind of deep connection between actors and audience.