The latest in the movie-to-Broadway genre of almost but not really new musicals, now playing an open-ended engagement at the Bernard B. Jacobs Theatre, is Almost Famous, the coming-of-age rock-n-roll road-trip diary-come-to-life of a budding teenage rock-music journalist, based on the award-winning film of the same name that premiered in 2000. The fictionalized semi-autobiographical book and lyrics by multi-hyphenate Cameron Crowe (who can now list Broadway among his credits) has original music and lyrics by Tom Kitt (who also provided the orchestrations and arrangements) added to its familiar selection of rock hits from the 1970s, performed by a large company of more than two dozen, many making their Broadway debuts. Despite the additional songs and a different cast, the production offers little more than a half-hour-longer running time and bankable nostalgia for fans of the movie (which is available for streaming).

For those unfamiliar with the story, it’s 1973, and fifteen-year-old bullied outsider William Miller, gifted her collection of rock albums by his older sister Anita (who leaves home to become a flight attendant after an argument with their strict mother Elaine), becomes a devotee and begins writing freelance features for music publications, most notably a failed assignment to cover Black Sabbath for Creem magazine. He then gets a call from Rolling Stone and is hired to do a cover story on the rising rock band Stillwater (Crowe’s fictionalized composite of members from the popular groups of the era), goes on the road with them (to the dismay of Elaine), and is exposed to their hedonistic world of sex, groupies, and sexism, drugs, egos, and in-fighting, where the rule is, “No attachments, no boundaries.” Before leaving, he is warned by his mentor Lester Bangs from Creem that he is not cool, that he shouldn’t become friends with the band, who’ll try to influence what he writes about them, and that his articles should be “honest and merciless.” It’s advice he ignores until a turbulent flight with the group brings out the truth about all of them.

Directed by Jeremy Herrin, the show is mildly entertaining but not over-the-top in-your-face dazzling, with overtly cloying ballads that clash with the rock style of the ‘70s, and portrayals that lack electricity and chemistry. It also misses the opportunity for the current production to make the offending characters – displaying the rockstars’ flagrant misogyny and its willing acceptance by the women who enable them – less sympathetic and apologetic, instead of having them come together in a kumbaya ending that defies credibility in 2022.

Consequently, for me, the most believable characterizations are the ones that are more intense and humorous than sentimental and endearing: Rob Colletti as the uncool but forthright Lester Bangs, who is hilariously outspoken with William in recognizing people for what they are and denouncing the death of 1960s rock-n-roll in favor of the commercialism of the ‘70s; Anika Larsen as the domineering mother and teacher Elaine, who repeatedly and adamantly reminds William not to do drugs, announces to her class that her son “was stolen by rockstars,” and gives Stillwater’s lead guitarist Russell Hammond a piece of her mind, more than once; and Drew Gehling as the band’s lead singer Jeff Bebe, who immediately nicknames the young journalist “The Enemy” and reacts strongly to Russell stealing the spotlight from him, in a funny and spirited performance that delivers the ego, passion, and competitiveness inherent in his role.

The lead actors – Casey Likes as the young and naïve William (who is intelligent enough to remember all the details about the members of Stillwater and to write well enough to be picked up by Rolling Stone, but somehow doesn’t know what year he was born or that he’s only fifteen, not seventeen, as his mother told him, since he skipped two grades); Solea Pfeiffer as the groupie-with-a-heart Penny Lane (who prefers calling herself a “Band-Aid” and claims she’s in it for the music, not the rockstars, takes William under her wing and inspires his puppy love, though she’s not interested in him in that way); and Chris Wood as the married Russell (who uses her when his wife isn’t with him on tour and gets rid of her when she is) – bring their vocal skills and characterizations to the material they’ve been given, in which their love of rock-n-roll, longings, and any semblance of moral integrity are on what proves to be, in the easily resolved happy ending, a low-impact collision course.

Costumes by David Zinn and hair, wigs, and make-up by Campbell Young Associates capture the authentic look and style of the ‘70s, and Sarah O’Gleby’s choreography brings moments of high energy, especially in the opening numbers. Lighting by Natasha Katz, sound by Peter Hylenski, and Derek McLane’s scenic and video design evoke the changing locales, from William’s home to the route, venues, and hotels of the band’s tour, without the immersive largesse of a true rock concert. Like the lead performances, and the overall mood of the show, they are more understated than explosive. 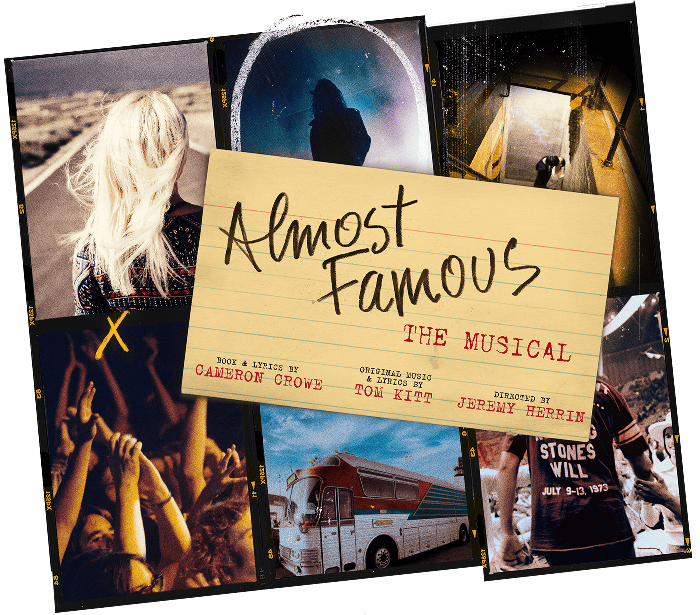