In keeping with its dedication to the development of new musicals and the rediscovery of musical gems from the past, the iconic catalogue of one of the greatest composers from the early years of Jazz, the Age of Swing, the Big Band Era, and the Golden Age of Hollywood is the subject of The York Theatre Company’s lively Off-Broadway production of Hoagy Carmichael’s Stardust Road, making its NYC debut at The Theatre at St. Jeans. Conceived by acclaimed Broadway veterans Susan H. Schulman (director), Michael Lichtefeld (choreographer), and Lawrence Yurman (music supervisor and arranger), and developed in collaboration with Carmichael’s son Hoagy Bix Carmichael, the top-notch musical revue features a stellar orchestra and cast performing more than three dozen American standards by the legendary Carmichael (1899-1981), to weave together a sung-through story of the journey of seven friends spanning four decades of the songwriter’s illustrious career.

Arranged in five parts, the show opens and closes at the “Stardust Roadhouse, somewhere in Indiana” (the state in which Carmichael was born), then moves to a jazz club in Harlem in the 1930s, a USO canteen during WWII, and a nightclub in Hollywood during the post-war period (historic places where his inspired music was played and loved). Each segment contains a selection of Carmichael’s classics arranged thematically to create a narrative of the characters’ meetings, camaraderie, relationships, service, and reunion across the years, relayed through the lyrics and tempos of the songs, corresponding old styles of dance, gestures, and deportment, and the expressive performances of an across-the-board outstanding company of triple-threats – Markcus Blair, Sara Esty, Dion Simmons Grier, Danielle Herbert, Kayla Jenerson, Cory Lingner, and Mike Schwitter. Without anyone uttering so much as a word of dialogue, they convey the distinctive personalities, stories, and sense of community, homesickness and loss of wartime, transport us to the bygone times and situations, and make us feel as if we know them, under Shulman’s emotive direction and active blocking, and Lichtefeld’s exciting choreography.

The terrific cast is accompanied on stage by a superb six-piece orchestra (Yurman on piano, Jack Cavari on guitar, banjo, and ukulele, Bill Lanham or drums and percussion, Sue Williams on acoustic and electric bass, Les Rogers on trumpet and fluegelhorn, and Grey Thymius on reeds) that delivers to perfection the variety of rhythmic, smooth, and bluesy sounds of such unforgettable Carmichael hits as the Oscar-winning “In the Cool, Cool, Cool of the Evening” (with lyrics by Johnny Mercer), “Lazy River” (lyrics by Carmichael and Sidney Arodin), “Heart and Soul” (lyrics by Frank Loesser), “Two Sleepy People” (lyrics by Loesser), “Georgia on My Mind” (lyrics by Stuart Gorrell), and the eponymous “Stardust” (lyrics by Mitchell Parish), which set the tone and fill the house through Julian Evans’ expert rich and resonant sound design. Among the other highlights (in a show filled with nothing but highlights) are the trio of women singing “Charlie Two-Step” in flawless three-part harmony, with an exuberant tap segment executed with panache by Cory Lingner.

Enhancing the thoroughly engaging performances is an equally transporting artistic design. Alex Allison’s period-style costumes capture the fashions, uniforms, and classes of the changing times and locales, identified by Brad Peterson’s projections, as does the efficient scenic design by James Morgan and Vincent Gunn, with easily movable bars and barstools, cafe tables, chairs, and tablecloths, old-fashioned cameras, mics, and other vintage props, and a floor dusted with stars. Beautiful colorful lighting by Jason Kantrowitz further serves to set the atmosphere and the moods of the stories and songs.

If you’re a fan of Hoagy Carmichael’s music, the stylings of the first half of the 20th century, and first-rate musical revues, be sure not to miss this wonderful production. If you’re not yet, go see it and you will most likely become one! 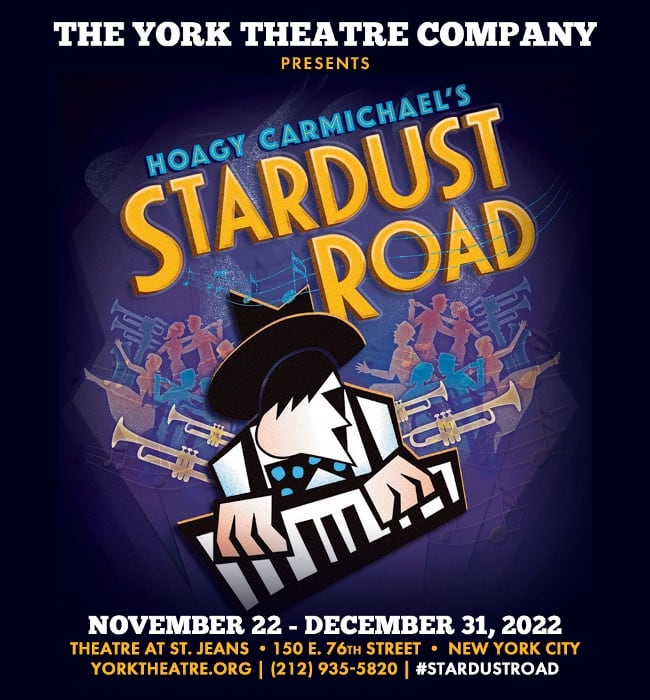