Based on the 1935 French film Fanfare of Love, Billy Wilder’s 1959 Hollywood screwball comedy Some Like It Hot, starring Tony Curtis, Jack Lemmon, and Marilyn Monroe, has been named the funniest movie of all time by both the American Film Institute and the BBC Culture’s poll, and was selected by the Library of Congress as one of the first 25 films for preservation in the United States National Film Registry in 1989. It was also instrumental in the weakening and ultimate replacement of the Motion Picture Production Code (commonly known as the Hays Code), after being produced and released without approval because of its central theme of crossdressing.

Newly reimagined by Matthew López and Amber Ruffin (book), Marc Shaiman (music and lyrics), and Scott Wittman (lyrics), with additional material by Christian Borle and Joe Farrell, Some Like It Hot is now a Broadway musical, with updates to the movie’s mid-century perspective that reflect our more inclusive post-modern values regarding race and gender, while still celebrating the authentic stylings of the 1930s. That registers a steaming hot 100 on my thermometer.

The story begins in 1933 Chicago and follows two musicians and tap dancers, Joe and Jerry, who witness a mob hit, then disguise themselves as women, flee the city by train, and become the newest members of an all-female Swing band touring the country en route to California, to evade being silenced by the gangsters in hot pursuit of them. Directed and choreographed by Casey Nicholaw, the show radiates non-stop energy and hilarity, with a spectacular cast of triple threats who turn up the heat, and a dazzling Art Deco design – with period-style sets by Scott Pask, lighting by Natasha Katz, costumes by Gregg Barnes, hair and wigs by Josh Marquette, make-up by Milagros Medina-Cerdiera, and hair and skin consultation by Cheryl Thomas – that transports us to the age of speakeasies and Hollywood glamour, amidst the hard times of Prohibition, the Great Depression, and discrimination.

Leading the exhilarating company are the sidesplitting “brothers” Christian Borle as Joe and his assumed guise of Josephine and J. Harrison Ghee as Jerry and his new non-binary identity of Daphne (which he embraces on his journey to self-realization and respect). They make for the perfect partners in song, dance, and deception, with personalities that complement each other, from their lifelong bond and their show-biz act (“You Can’t Have Me If You Don’t Have Him”) to their adventures on the lam as women (“Vamp!”), all delivered with spot-on comic timing. Borle also takes on the role of Kip, who, he claims, is a wealthy European with Hollywood connections, with a riotous German accent and a mission to win the heart of Sugar – the lead singer of the band, played by Adrianna Hicks, in a powerhouse performance that combines sweet vulnerability, steadfast determination to become a star, and showstopping vocals on her emotion-packed torch song “A Darker Shade of Blue.”

They are given stellar support by the featured cast of NaTasha Yvette Williams as the bandleader Sweet Sue, another blockbuster singer (opening the show at the soon-to-be-raided speakeasy with the ebullient “What Are You Thirsty For?”) and a strong and knowing Black woman who rules, and watches out for, her group; Kevin Del Aguila as the delightfully waggish Osgood, a “Poor Little Millionaire” who has fallen hard for Daphne (“Let’s Be Bad”) and will spare no expense to get her; and Mark Lotito as the murderous mob boss Spats and Adam Heller as Agent Mulligan, who involve the entire company (TyNia René Brandon, Ian Campayno, Gabi Campo, DeMarius Copes, Casey Garvin, Devon Hadsell, Ashley Elizabeth Hale, Jenny Hill, K.J. Hippensteel, Abby Matsusaka, Jarvis B. Manning Jr., Brian Thomas Martin, Amber Owens, Kayla Pecchioni, Richard Riaz Yoder, Angie Schworer, Charles South, Brendon Stimson, Raena White, and Julius Williams) of gangsters, bellhops, band members, and their love interests in a zany door-slammer chase at breakneck speed through the California hotel, which provides the consummate climax for the fast-paced show.

Through it all, the original songs drive the narrative, define the characters, and capture the rhythm of the music of the time to a tee, from Swing, to Jazz, Big Band, and the Blues (with top-notch orchestrations by Charlie Rosen and Bryan Carter, music direction by Darryl Archibald, sound by Brian Ronan, music supervision by Mary-Mitchell Campbell, music coordination by Kristy Norter, and Glen Kelly providing dance and incidental music arrangements); Nicholaw’s inspired vintage-style choreography is breathtakingly dynamic and painstakingly precise; and the subtle, witty, and biting observations of the characters on endemic bigotry give the show its welcome current import, while still retaining the basic plot points of the original motion picture. It all works, in a brilliantly conceived, masterfully executed, and thoroughly entertaining hot, hot, hot show that shouldn’t be missed. 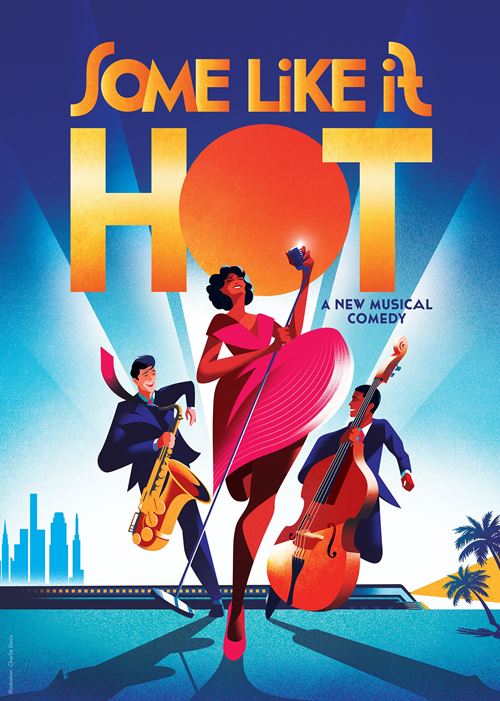 Some Like It Hot plays an open-ended run at the Shubert Theatre, 225 West 44th Street, NYC. For tickets (priced at $74-278, plus fees), go online. Masks are optional but strongly encouraged in the theater.