Who says that sports and theater don’t mix? American musicals, plays, and film have pitched great stories about sports and amazing athletes—Damn Yankees, National Pastime, Fences, Bull Durham, Take Me Out, You’re a Good Man, Charlie Brown, Field of Dreams, Moneyball, and 42, for example, are just a gloveful of beloved theatrical stories about baseball.

You don’t need to be a baseball fan to be inspired by this amazing story. Even if you don’t know the game, the cast gives a quick and entertaining primer on how it’s played at the outset of this thoroughly enjoyable and lively production.

Santoya Fields, starring in the title role, had a helluva lot of dialogue to get under her belt. She narrates her own life story as the first woman to play professional baseball and a trailblazer in the Negro Leagues. Santoya was convincing as Toni Stone, and it was thrilling to watch her throw a pitch.

Spunky, perpetually upbeat, with do-it-or-die persistence and a winning personality that could wind her way into any game describe the unflappable energy that Santoya Fields projects in her characterization of Toni Stone.

What Toni Stone brought on the field was a seeming invulnerability to the racism and sexism of the 1950s and the abusive competitiveness of male ballplayers who couldn’t fathom that a woman could be as good or even better than they are at the game.

Resilience, drive, or call it what you will, Toni Stone’s passionate desire and determination to live out her dream to play baseball gave her the edge she needed to achieve that sweet spot “between the reach and the weight of the ball.”

In essence, Toni Stone is about keep on keeping on despite the odds. It’s not just about the baseball. And we could all use more of that inspiration in these trying pandemic times.

If there’s any fault to being fabulous in overcoming obstacles it’s that Toni Stone’s character seems emotionally one-dimensional and her self-assured hyper-focus on succeeding in the game makes her seem emotionally flat. She comes off as super-human—and we know she wasn’t.

If only life was as simple as Toni’s obsessively citing baseball statistics to keep her focused whenever life sent her a difficult fastball. Everybody cusses somebody out or just has a good cry sometimes. On the other hand, maybe it really was Toni Stone’s way of carrying herself in order to survive. She never lets you see the pain get to her.

The Indianapolis Clowns, the Harlem Globetrotters of baseball, was the team Toni played on during the period of her life story. They’re played by a cast of amazing actors with great comedic timing who stand alongside Toni more than challenge her.

They don’t give Toni as much of a scuffle as might be expected, other than one sexist hissy fit scene with a jealous teammate. Perhaps it was because they were experiencing the same scuffle as she was with Jim Crow and taunting by white crowds unready to see Black ballplayers succeed.

Lots of locker room sex talk full of fun and puns in this one. The team’s “Playing the Dozens” (they talk about your mama!) is worth the price of the ticket.

Among the standout roles (and mind you—the entire cast was outstanding) was Millie played by Kenn E. Head, a brothel owner of a hotel where the team would stay on barnstorming road games when denied rooms in white establishments.

Millie is a prissy hoot and a likeable character likely created in the playwright’s adaptation of the book Curveball, the Remarkable Story of Toni Stone by Martha Ackermann. Millie’s a kind of alter ego who challenges Toni to confront her struggle with defining her female identity in a decidedly male sport.

Another standout was Aldo Billingslea as Alberga, the man who sees right into the feminine heart of Toni Stone and woos her to the altar. Billingslea’s portrayal has the gravitas of a well-to-do man who is assured enough about his masculinity to pursue a strong-willed female ballplayer who’s comfortable wearing mannish clothes, until Toni challenges his authority.

Scenic design by Ricardo Hernandez creates an effective space for the ballplayers’ movements and for the unfoldment of every shift in the narrative. Overhead klieg lights and three dugout bleachers double as whatever the moment calls for in Hernandez’s simple set.

Dance lovers will awaken to the beauty in baseball by watching the cast’s movements. The arm placement of a bat swing, the arabesqued lift of the leg, the carriage of the arms, the tilt of the torso, the plie bend of the knees, presented in choreography by Tony Award nominee Camille Brown, assisted by Jay Staten and Rickey Tripp, stunningly accentuate the rhythmic grace of a ballplayer on the mound.

Sound is super important in this production as imaginary balls soar through the air and aurally land at the right moment on the edge of a bat created by pitch-perfect sound design by Broken Chord. Spotlights surround Toni at poignant shifts in the show and Lighting Designer Allen Lee Hughes bathes her in radiance that highlights the sensitivity of the moment. Costumes by Dede Ayite are simple baseball uniforms emblazoned with the Indianapolis Clowns signature red lettering.

Toni Stone has the power to change one’s perspective about the capabilities of female athletes and the power of human resilience. It anchors an important moment in American theater and is more than worth seeing to know more about our country’s hidden history.

Toni Stone runs September 3 to October 3, 2021, in the Kreeger Theater at Arena Stage, 1101 Sixth Street SW, Washington, DC. Tickets may be purchased online at arenastage.org, by phone at 202-488-3300, or at the Arena Stage sales office Tuesday through Saturday from noon until 6 p.m. For information on savings programs such as pay-your-age tickets, student discounts, Southwest Nights, and hero’s discounts, visit arenastage.org/tickets/savings-programs.

SEE ALSO:
Why Toni Stone’s story needs to be told: A Q&A with Santoya Fields, who stars as the trailblazer at Arena Stage interview by Ramona Harper 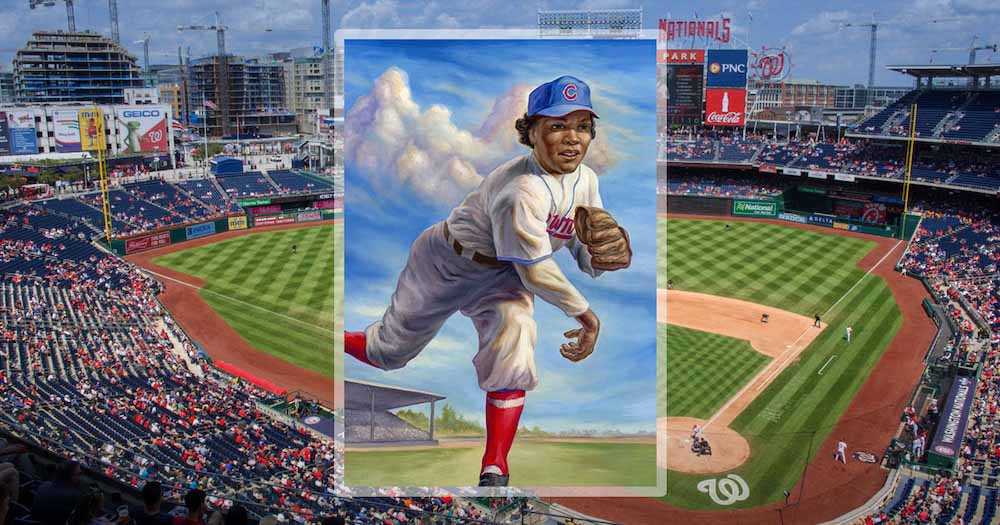 See Toni Stone FREE at Nationals Park
For a special one-night-only event September 26, 2021, Toni Stone will be simulcast to the center field videoboard in Nationals Park (1500 South Capitol Street, SE
Washington, DC) for up to 12,000 people to experience. Reservations are free and available online.