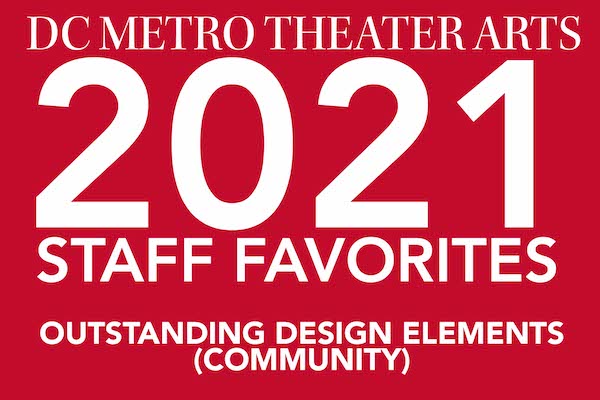 As the year drew to a close, we asked DCMTA writers to think back on the shows that left an indelible impression on them in 2021. In this category, outstanding community theater design, we recognize:

Here are the community theater designers that left the biggest impression on our writers in 2019. Recipients are listed underneath the show they are being recognized for.

A Christmas Story, Silver Spring Stage
Maggie Modig, Set Design, and Nancy Davis, Properties Design
Set Designer Maggie Modig (WATCH Award winner) and Properties Designer Nancy Davis created a world perfectly suited to the story at hand. Part of the charm of A Christmas Story is its idyllic American setting, and Modig and Davis tap into that charm through period-appropriate decor from the fridge to the phone.
Steve Deming, Lighting Design
A Christmas Story’s numerous dream sequences — where we get a glimpse into young Ralphie’s imagination — are nicely differentiated by whitish-blue lighting. The lighting made it easy to slip between the story being narrated for us and the memory sequences interspersed between scenes.
Read Nicole Hertvik’s full review

Five Women Wearing the Same Dress, Dominion Stage
Danielle Guy, Director
Kudos to director Danielle Guy for poking at the underlying problems of a play written by a man that paints women as more than two-dimensional characters. Guy also does a masterful job maintaining the rapid-fire dialogue with fully committed energy whether the characters are digging in their abundant shoulder bags, hurling objects with abandon around the room, revealing secrets, clamoring for space, or guzzling booze.
Read Debbie Minter Jackson’s full review
Read commentary by Danielle Guy and Gwyneth Sholar

On the Town, Rockville Musical Theatre
Michael Page and Coleen Prior, Direction and Choreography
In a show developed from a ballet — the Robbins/Bernstein Fancy Free — dance is the key element. The cast executes director/choreographers Michael Page and Coleen Prior’s movement with unstinting energy and high quality, whether in large ensemble numbers like the “Times Square Ballet” that concludes Act 1, smaller group scenes like the three sailors’ initial, and iconic, “New York, New York,” or intimate pieces like the Coney Island dream ballet between Gabey (Tim Lewis) and Ivy (Kelly Dobkins). Almost everyone is constantly on the move, and Page and Prior deserve credit for seamlessly integrating the work of leads, featured dancers, and ensemble. Keeping some pairs in the ensemble together as couples in a number of the scenes is a sweet touch.
Read Bob Ashby’s full review

Rumors at Rockville Little Theatre
Bill Brown, Set Design
Bill Brown’s set for Neal Simon’s Rumors featured all the elements you want in a slapstick drawing-room comedy: a gorgeous set of stairs creating two levels on the stage and multiple doors that open and close allowing for comedic close calls and near misses as members of the cast enter and exit the doors while each pursuing their own ends in this madcap comedy.
Chris Penick (Sound Design) and Stephen Deming (Lighting Design)
A large part of the humor of Rumors has to do with new couples arriving in the midst of a chaotic situation. In Rockville Community Theatre’s production, the guests arrive on a gravelly driveway that makes an audible crunch as the cars arrive. The sounds and lights that appeared through the interior windows throughout the production added to the humor and gave the show a realistic fullness.
Read Nicole Hertvik’s full review

The Social Secretary, Sterling Playmakers
Judith Harmon, Mikayla Kirr, and Lori Crockett, Costume Design
In The Social Secretary, the costumes by Judith Harmon, Mikayla Kirr, and Lori Crockett were an immediate standout. Every member of this 30-person cast was dressed to impress with elaborate costumes, a rainbow of summer colors, and consistent looks among the servants.
Ellen Price, Scott Ruegg (Set Designers), Terry DiMurro (Set Artist)
A technical standout of the production is the backdrop of the set by set designers Ellen Price and Scott Ruegg and set artist Terry DiMurro. The stunningly bright, two-dimensional backdrop on a useful platform struck a perfect chord for this storybook romantic comedy, lending itself immediately to upstairs and downstairs living spaces to heighten the class conflicts.
Read Julie Janson’s full review

The Wizard of Oz: A British Pantomime, The British Players
Nicola Hoag, Direction
Hoag put together a masterful event, full of all the elements you want in a British Pantomime, with bawdy jokes, entertaining music, and skilled performances, all blending together into one joyous holiday escape at a much needed time.
Read Nicole Hertvik’s full review