In 2012, writer Damian Weber published a compendium of every entry about Jean-Michel Basquiat from The Andy Warhol Diaires; they spanned just over four years, from 1982-1986. He did it, he wrote, because “I love Jean Michel, I love Andy, and I love the truth.” If only The Collaboration, written by Anthony McCarten, directed by Kwame Kwei-Armah, presented by MTC, and now playing a limited engagement at Broadway’s Samuel J. Friedman Theatre through February 11, following an acclaimed premiere at the Young Vic Theatre in London, adhered to the same standards of accuracy. It doesn’t.

The largely fictionalized projection of the iconic artists’ joint work, friendship, and interactions at their studios in NYC employs a format similar to that of the jukebox musicals for which the New Zealand-born London-based librettist is known (including A Beautiful Noise, which is also presently on Broadway). But here, instead of a catalogue of hit songs used to tie a contrived bio-story together, random quotations from different times and situations are expanded into imagined conversations and invented confrontations between the King of Pop Art and the rising-star of Neo-Expressionism, as concocted from a current 21st-century perspective. While some artistic license is to be expected in a play, here the egregious plays with historical chronology and readily available documentation give little indication of what really went on with these real-life figures.

To set the mood of New York’s pop culture of the 1980s, the production’s in-house DJ theoretic curated and spins a playlist of the top disco hits of the decade for the pre-show entertainment, accompanied by swirling colorful spotlights throughout the house (lighting by Ben Stanton) and video projections of the streets of the City at the time (projection design by Duncan McLean), to engender a sense of context, nostalgia, and energy, but with little connection to the content or dialogue of the play, focused on the private interactions of the central characters.

In Act I, they come together hesitantly, in 1984, at the urging of Swiss art dealer and gallery proprietor Bruno Bischofberger (in a radically condensed and confused version of when and how it came about – in fact, they’d already known one another since Basquiat’s days as the graffiti artist Samo, Jean was living and working in a building owned by Andy, and they had already been involved in a three-way collaboration with Italian artist Francesco Clemente prior to the sixteen paintings they created for their ‘85 exhibition at the Shafrazi Gallery). They expound their respective theories on art and their preferred media, in a series of talk-driven scenes that make for an interesting art historical debate, injected with touches of humor, but with minimal action, other than facing the audience downstage to apply touches of paint to unseen canvasses and Andy moving around with a camera, intent on capturing it all on film.

Act II, by contrast, shifts from Andy’s clean studio to Jean’s dirty one, and the tone becomes uncharacteristically explosive and melodramatic. There are segments of arguments and high emotion, with the appearance of Maya (a composite of Jean’s many girlfriends), who needs money for an abortion and to pay her rent (though she took a limo over), and the news of the police brutality that took the life of their friend Michael Stewart (a street artist arrested for painting graffiti on the wall of a subway station) – a fatal incident that occurred in 1983, not in 1985, as suggested in the play, and is inaccurately seen as a catalyst for tension between Jean and Andy – just a few examples of the many liberties taken with the actual timeline and characterizations, to create a narrative arc that fits with the most critical issues of today.

Paul Bettany as Warhol and Jeremy Pope as Basquiat assume the familiar demeanors, postures, gestures, and body language of Andy and Jean, in authentic period-style costumes (by Anna Fleischle, who also designed the set) and spot-on show-stealing wigs (by Karicean “Karen” Dick and Carol Robinson). And though their voices and speech patterns are delivered with recognizable accuracy (dialect and vocal coaching by Deborah Hecht), the decibel level is much too loud for the generally soft-spoken artists they portray – likely attributable to the clashing timber of the script and direction  – as they share their disparate ideas, work together, bond (best seen in the black-and-white videos of the in-character actors projected on side screens during intermission), and come into conflict.

But there are also entertaining touches of humor (one of the funniest is Andy’s rapid-fire recounting of how he spent the previous night, while dropping the names of an array of the biggest celebrities of the time), foreshadows of the problems that would lead to their premature deaths, within a year and a half of each other, in 1987 and 1988 (Andy’s from a diseased gall bladder; Jean’s from a heroin overdose), and an underlying theme of the attitudes towards money and success in America (with a staggering voiceover conclusion that seals their reputations as two of the greatest and most valued artists of the 20th century).

The leads are supported by an emotive Krysta Rodriguez as Maya and a funny Erik Jensen as Bruno (with a heavy German accent), both turning in impressive performances that trigger key points in the devised story. Stanton’s dramatic lighting (which changes when Andy is filming), Emma Laxton’s sound design (including recordings of the jazz music loved by Basquiat but not appreciated by Warhol), and original music by Ayanna Witter-Johnson serve to enhance the moods and scenes of the show as conceived. It should also be noted that, as stated in the script and the program, excerpts and “adaptations of excerpts” from the words of Andy Warhol are used with the permission of The Andy Warhol Foundation for the Visual Arts, Inc., and the artwork by Basquiat appearing in the production “is not meant to be interpreted or perceived as actual or legitimate.” Those are some significant points that say a lot about the verity of the play.

For theatergoers who didn’t know Andy or Jean – they were real human beings, not fictional characters – The Collaboration will leave a distorted impression of their relationship, their chronology, who they were, and how they behaved. It leaves me wondering how the people involved in this production would feel, if 40 years from now, someone presented such a fabricated and dramatized version of them and their theatrical collaboration, instead of a personally and historically accurate portrayal? 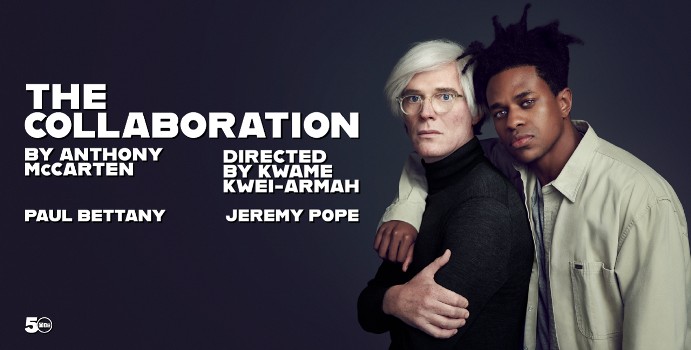 The Collaboration plays through Saturday, February 11, 2023, at the Manhattan Theatre Club, performing at the Samuel J. Friedman Theatre, 261 West 47th Street, NYC. For tickets (priced at $84-298, plus fees), call (212) 239-6200, or go online. Masks are required for all Tuesday evening and Sunday matinee performances; masks are optional but strongly encouraged for all other dates.