2022 was a year of spectacular performances on DC-area stages as actors came back from COVID closures ready to give it their all. Here are the professional performances that stuck with our writers throughout the year.

Note: DC Theater Arts does not publish a “best of” list. If you got on a stage this year, we think you are the best. Since our writers all see different shows, and no DCTA writer sees all the shows produced in our region, this list only represents the subjective opinions and recollections of our writers. These are the performances that left an indelible impression on us. 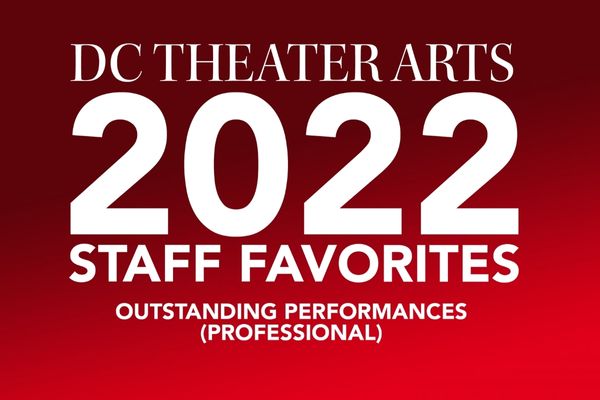 Hend Ayoub as herself in Home? at Voices Festival Productions
Personal and artistic persistence in Hend Ayoub’s solo ‘Home?’ by Sophia Howes

Amari Cheatom as Ira Aldridge in Red Velvet at Shakespeare Theatre Company
The acclaim and agony of a great Black actor, in STC’s ‘Red Velvet’ by Sophia Howes

Kristolynn Lloyd as Anna Murray Douglass in American Prophet at Arena Stage
Unforgettably powerful ‘American Prophet’ is on fire at Arena by Bob Ashby
The woman who freed Frederick Douglass: a Q&A with Kristolyn Lloyd by John Stoltenberg

Robert Mellon as Iago in Othello at IN Series
‘Othello/Desdemona,’ IN Series’ unique two-evening opera, is epic by Gregory Ford

Kimberly Schraf as the mother in Sheboygan at the Capital Fringe Festival
2022 Capital Fringe Review: ‘Sheboygan’ by novelist Louis Bayard by Nicole Hertvik

Sometimes an entire cast works so beautifully together that they all deserve recognition for their collective achievement. Other times, such as in some of 2022’s quiet two-handers, or in the explosive creation of Caliban as a perpetually entwined creature in Round House’s The Tempest, a pair of actors rely on each other so deeply that their performances cannot be considered apart.

Requiem at IN Series: full ensemble
A flat-out glorious ‘Requiem’ marks IN Series’ move past Mozart by Gregory Ford

Desdemona at IN Series: Maribeth Diggle and Claron McFadden
‘Othello/Desdemona,’ IN Series’ unique two-evening opera, is epic by Gregory Ford

A Trip to Bountiful at Ford’s Theatre: Nancy Robinette as Carrie, Kimberly Gilbert as Jessie Mae Watts, and Emily Kester as Thelma
Ford’s lyrical ‘Trip to Bountiful’ travels back to an illusory time by John Stoltenberg

In His Hands at Mosaic Theater: Michael J. Mainwaring as Daniel and Josh Adams as Chris
‘In His Hands’ at Mosaic asks if it’s OK with God to be gay by John Stoltenberg
Benjamin Benne on queer love and Christian faith in Mosaic’s ‘In His Hands’  by Nathan Pugh

Einstein’s Wife at Expats Theatre: Cecelia Auerswald as Mileva Marić and Sasha Olinick as Albert Einstein
In ‘Einstein’s Wife’ at ExPats Theatre, the downside of marrying a genius by Sophia Howes

The Tempest at Round House Theatre (in collaboration with Folger Theatre): Eric Hissom as Prospero and Megan Graves as Miranda
‘The Tempest’ at Round House is big, bold, and magical by Jared Strange